Economic support from friends like Iran and Russia has bolstered efforts by Syrians' to fight terrorism for over six years, says Syrian deputy FM 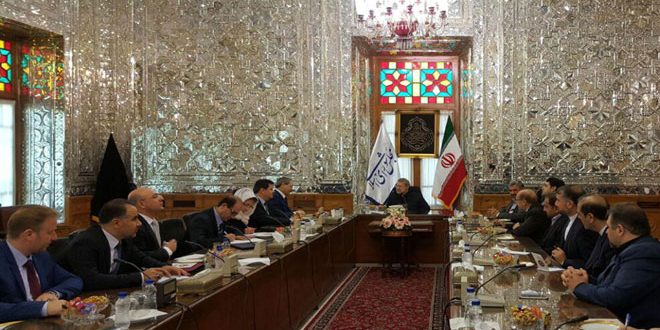 Continued economic support from Syria’s friends has contributed to the country's victory against terrorism, Deputy Foreign Minister Faisal Mikdad said during a recent visit to Iran, adding that the economic battle is no less important than the military battle.

Speaking with Speaker of Iran’s Shura Council Ali Larijani on bilateral relations and the latest developments in Syria, Mikdad underlined the economic aspect of the war against terror, saying that “the support of friends (has) bolstered the steadfastness of the Syrian people against terrorism for over six years, despite the unparalleled logistical support to terrorists.”

Mikdad went on to say that the war waged on Syria by multiple sides spared no facet of life, yet years have passed and Syria is still steadfast thanks to the brave leadership of President al-Assad and the support of allies like Iran, Hezbollah, and Russia.

For his part, Larijani also stressed the need to focus on the economic battle and overcome difficulties, underlining the importance of Syrian-Iranian-Russian coordination in fighting terrorism. He affirmed that Iran’s government, leadership, and people will continue providing political, economic, and military support to Syria until terrorism is defeated.