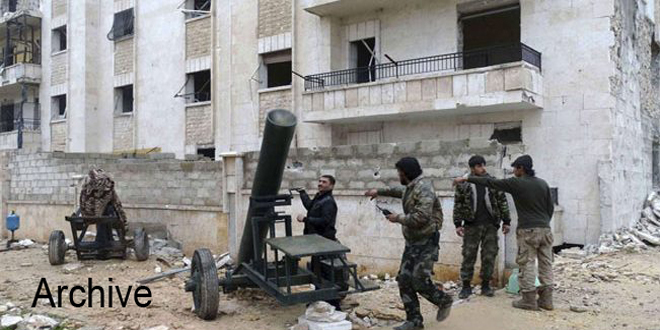 Gunmen in eastern Aleppo on Friday opened fire on demonstrators protesting against the terrorist’s atrocities, demanding they leave or allow the residents to exit the city through the safe corridors specified by the Syrian government and Russia.

Citing local sources, a reporter for state-run SANA said that hundreds of residents in the eastern neighborhoods of Aleppo took to the streets on Friday to pressure terrorists to evacuate the area or allow the civilian population to leave. Militants opened fire on the protesters killing and wounding of dozens of people including children, the reporter added.

According to the local sources, the terrorists abducted a number of civilians to the city’s eastern neighborhoods, stressing that the militants are continuing their crimes against residents and open fire on those who attempt to flee through the humanitarian corridors.

Aleppo’s eastern districts have witnessed over the past week a state of popular outrage towards militants based there, with demonstrations demanding the departure of the armed groups from Aleppo city.

Russian defense ministry spokesperson Igor Konashenkov said that terrorists in various parts of eastern Aleppo have opened fire on civilians, killing over a dozen people and injuring more than 40, after recent demonstrations broke out in the city.

Terrorist groups linked to Al-Qaeda-affiliate Nusra Front and Ahrar al-Sham are besieging thousands of civilians in the eastern parts of Aleppo, preventing residents from leaving the districts and using them as human shields. Militants have also been said to have stolen food supplies and prevented the locals from receiving humanitarian aid.

Konashenkov said militants in eastern Aleppo dispersed the demonstration, shooting at protesters with heavy weapons, as well as mining the surrounding area and placing snipers on the roof.

In a different area of the city, about 200 civilians were fired upon by militants while demonstrating and trying to make way to a territory controlled by Syrian government forces.

"Seventeen people died at the site, including two teenagers of 13 and 15 years of age, over 40 people were wounded," Konashenkov said.

He added that the militants detained and killed about 10 men whom they claimed were responsible for organizing the demonstrations.