Air strikes on the province's northern city hit a roof-tile workshop killing seven and wounding more than 10 others, according to activist 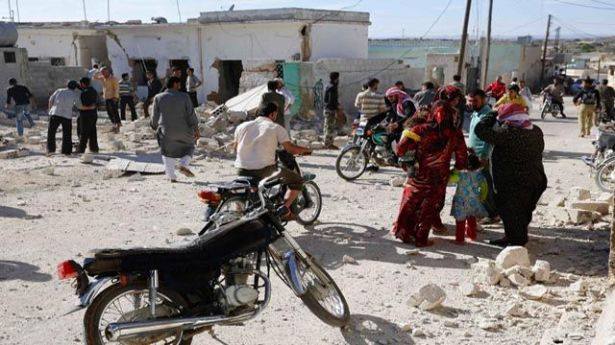 Russian warplanes on Tuesday carried out a massacre on the city of Al-Lataminah in the northern Hama countryside, killing seven civilians and wounding more than 10 others.

Media activist al-Jubar al-Hamawi told ARA News that “Russian warplanes carried out four air strikes, hitting a roof tile manufacturing workshop, which killed seven workers and wounded more than 10 others” adding that, “The air strikes caused a delay in removing the corpses and treating the wounded.”

The cities of Taybat al-Imam and Kafarzeita were also hit by air strikes without reports of any victims, while the warplanes returned to strike the outskirts of Al-Lataminah without any further casualties. The air strikes targeting the villages of al-Boweida and Lahya in the northern Hama countryside resulted in a number of wounded.

Opposition fighters had repulsed the raids by targeting warplanes with heavy machine guns and anti-aircraft guns at the outskirts of Lahya and Al-Lataminah. The fronts in the northern Hama countryside were relatively calm after attempts by regime forces and allied militias to enter the Lahya village and the city of Tayra a number of days ago.