Syria and Iran sign contracts on economic cooperation in oil, mobile communications, agriculture, animal resources and industry, with an additional agreement to develop Syria's ports currently in the pipeline 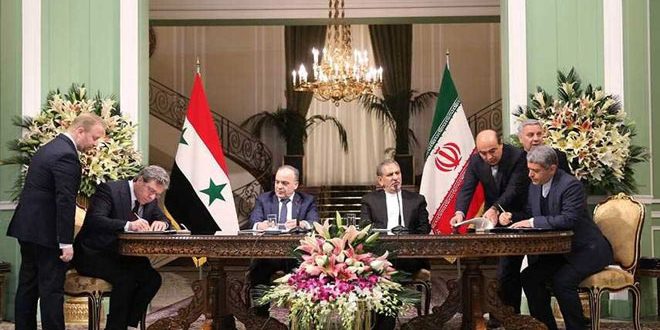 Syria and Iran have approved a number of agreements which aim to boost cooperation in the fields of oil, mobile communications, agriculture, animal resources and industry, as part of an economic cooperation deal signed more than a year ago.

In a statement following the signings, PM Khamis referred to an additional contract to invest in Syria’s ports, stressing that these contracts are at the core of a package of mutual cooperation between the two countries in the areas of industrial cooperation and investment in Syria’s reconstruction.

“We also stressed the need to set up goals within a specific timetable to upgrade the relationship in terms of the trade exchange and its volume and in terms of the scale of the projects and the necessary funds to appropriately develop these projects,” Khamis added.

The PM affirmed that the negotiations with Iran were “constructive” and “good,” noting that Syria conveyed its vision of future cooperation in various economic, industrial, trade and services fields to achieve the best interests of both countries.

For his part, Jahangiri said the signing of the agreements was the result of the standing bilateral relationship between Iran and Syria, noting that an additional sixth agreement will be finalized and endorsed in the coming weeks.

He pointed out that the Iranian private sector and commercial companies have the opportunity to resume work in Syria, including trading goods and commodities that Syria needs through the current credit line.

In another relevant note, an official Syrian delegation arrived in Iran on Monday, with representatives from the ministries of agriculture, industry, economy, foreign trade, resources and communications.

The visit aims at convincing senior Iranian officials to follow up on economic and developmental agreements signed between the two countries, while also expanding economic relations and enhancing counter-terrorism cooperation.