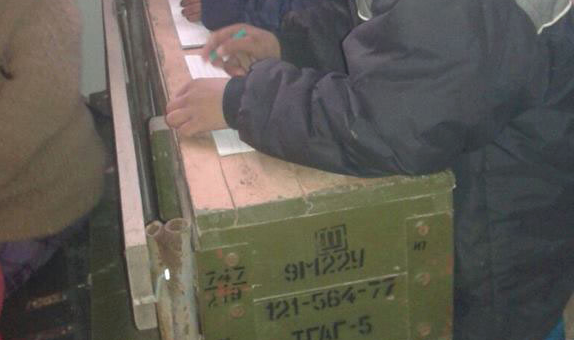 School teachers in the village of Umm al-Nir in the southern Idleb countryside have turned ammunition and rocket crates into desks for students after the school’s seats were destroyed in air strikes.

One of the teachers who participated in the project told Zeitoun: “There were only 15 desks left in the school that were fit for sitting, and although we asked all the educational groups for them, no one helped us to get new ones, which was a double blow.”

The teacher Ahmed adds: “Some of the teachers recommended the idea to the school administration, and we contracted a creative carpenter after obtaining these boxes which had contained Grad missiles, and we turned them into desks. We were forced to do this because we weren’t given support. Education and development receives no support from the director, but backing does come from a small number of employees in the village schools.”

The school administration asked agencies to provide the basic requirements for educational services to continue, most importantly fuel and seats.

The services administration agency renovated some of the schools in the north of the province but is yet to start its projects in the south.