Assad regime negotiator Bashar Jaafari calls for respecting nation-wide ceasefire and the closure of borders with Turkey on first day of talks in the Kazakh capital, government-run newspaper reports 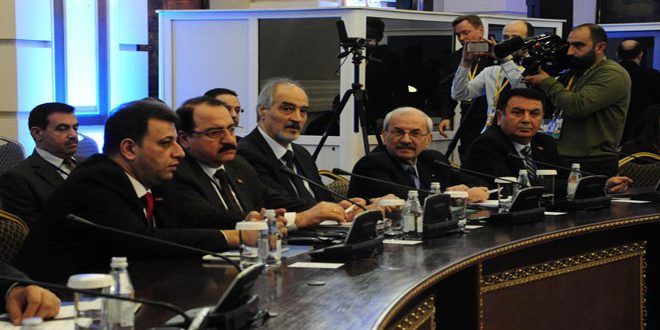 Head of the Syrian government delegation to the Astana meeting Bashar al-Jaafari said on Monday that the negotiations will aim at securing a ceasefire agreement throughout Syria, except for the areas where terrorist organizations are active.

In a statement at the opening of Astana meeting on Monday, Jaafari said that Syria hopes the meeting will work to fix the ceasefire for a specified period of time in a way that would separate the terrorist groups that have agreed to the truce and that desire national reconciliations.

During the speech, Jaafari asserted that herds of Takfiri terrorists were gathered, trained, financed, armed, and brought across the borders of the neighboring countries.

He said that Syria hopes to unite all efforts in fighting terrorism to meet the demands of the Syrian people, and this necessitates closing the Syrian-Turkish borders and drying up the sources of terrorism.

Jaafari said that Syria’s political powers — including the government and oppositions groups — along with the UN Security Council’s resolutions and the consultative meetings have unanimously agreed on respecting Syria’s sovereignty and rejecting all forms of foreign interference in the country’s internal affairs, ensuring that only the Syrians will decide the future of their country.

“[The] Syria which we love is the homeland of diversity in all its forms, a homeland where the Syrians believe in the basis and principles of their independent democratic secular state based upon political pluralism, the rule of law, independence of the judiciary system, equality among citizens in rights and duties, guaranteeing cultural and social variety among the [whole] spectrum of the Syrian people, as well as maintaining the continuation of the work of the state institutions,” he said.