Religious and political figures pay tribute to the Aleppo-born priest and controversial activist, who was once convicted of smuggling weapons to Palestinian militants in the 1970s, after passing away earlier this month in the Italian capital 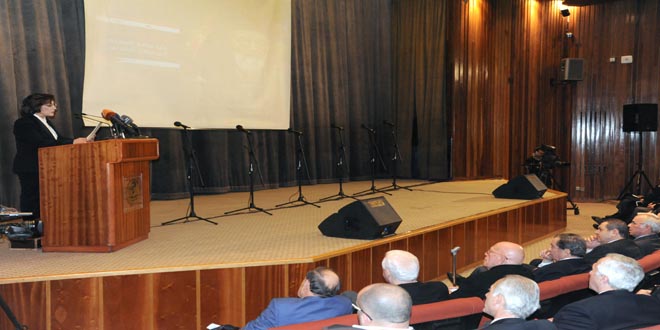 A memorial ceremony for the late Archbishop Hilarion Capucci was held on Wednesday by the Syrian Cabinet, the Melkite Rome Catholic Church and the Palestinian Embassy in Syria.

Bouthaina Shaaban, advisor to President Bashar al-Assad, said the late Capucci, who died on January 1 in the Italian capital Rome, translated his profound faith in God into persevering with resistance work.

She noted the Archbishop’s commitment to the issues of his homeland Syria, recalling Capucci’s attendance in Switzerland to participate in the first international conference on the war on Syria in the city of Montreux in 2014.

“How could I not be here with you and with our beloved Syria,” Shaaban quoted Capucci as saying at their meeting in Montreux city.

Capucci was born in Aleppo city in 1922 and was appointed bishop of the Greek Catholic Church in Jerusalem in 1965.

In 1974, Israeli occupation forces arrested Capucci and sentenced him to 12 years in prison on charges of supporting the Palestinian resistance. He was released after four years in detention following pressure from the Vatican, and then exiled from the occupied territories in 1978 to Rome.

Despite his deportation, Capucci continued his struggle for the Palestinian people and support for the Syrian people in the face of terrorism, and to demand a stop to the external aggression against Syria.