Army says it will help civilians return to their homes in the eastern countryside of Aleppo now that stability has been restored, pro-government newspaper reports 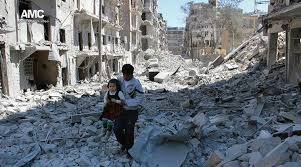 The Syrian army’s general command called on civilians to return to their homes in 44 towns and villages in the eastern countryside of Aleppo province after the army had restored security and stability to these areas.

In a statement issued on Monday, the general command said that army units operating in the area, in cooperation with Syrian authorities, will facilitate the return of residents to their homes.