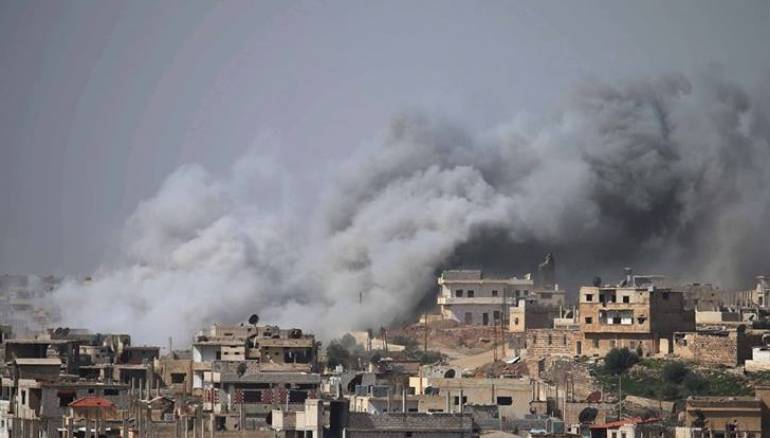 In Daraa city, efforts by the regime on Thursday to capture a strategic neighborhood led to intense fighting between rebels and regime forces backed by heavy air strikes, activists reported.

According to residents and field activists, the regime’s jets conducted 15 raids and dropped six barrel bombs on al-Manshiya neighborhood, home to 20,000 residents.

Since clashes erupted in early February, regime bombing has led to the death of more than 100 civilians and rebel fighters. Meanwhile, Russian fighter jets have conducted 340 raids in the past three days in the southern province of Daraa, the task command of Russia's Hemeimem military air base reported last Saturday.

A statement, posted on the base’s official Facebook page, said that "our bombers carried out 340 raids in the region over a five-day period, which is the equivalent of 30 days of aerial support for the Republican Guard units in Deir ez-Zor and its military airport." The statement also strongly rejected the charges that "the Russian air force was falling short of support for its allies in the south of Syria."

A statement issued last week by rebels named the factions participating in the battles, which included Haya’t Tahrir al-Sham, led by a former Al-Qaeda offshoot – previously known as the Nusra Front and Ahrar al-Sham and Jaish al-Islam and 32 other factions.

Meanwhile, teaching continues to be suspended in the schools of Daraa as regime warplanes have been bombarding the city and the surrounding countryside. The Jordanian border city of Ramtha also suspended teaching in schools on Thursday, the Jordanian government-run news agency said.