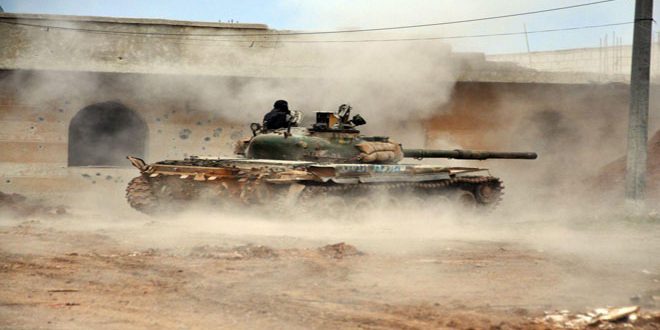 Syrian artillery forces targeted the fortifications of an Islamic State terrorist group in the surrounding area of Liwa al-Taamin south of Deir-ez-Zor city, killing and injuring several ISIS members and destroying their weapons.

SANA's correspondent in Deir-ez-Zor cited local sources on the strategy of ISIS affiliated terrorist groups to destroy tall buildings, particularly water reservoirs in the villages of Jazaret al-Buhmeid, al-Milaj, and al-Harmoushia in the northwest of Deir-ez-Zor city.

Meanwhile, the Syrian air force launched heavy strikes against ISIS’ convoys heading from Raqqa in the direction of Deir-ez-Zor.

The correspondent reported that the strikes left many terrorists dead and destroyed a number of vehicles carrying terrorists, heavy machineguns, and arms.

Citing local sources, the reporter added that in Hatla, a village in the eastern countryside of the province, air raids destroyed a convoy of ISIS vehicles southwest of the village.