The government delegation stresses that the peace talks' achievement was an agreement on the agenda, which now includes counterterrorism as the fourth main point, state media reports 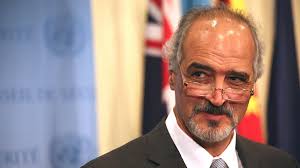 Syrian government delegation head Bashar al-Jaafari said, a day after the fourth round of Geneva talks ended, that the main achievement of the peace talks was an agreement on a four-point agenda which included fighting terrorism.

Speaking to reporters on Saturday, Jaafari said the agenda’s points or “baskets” were governance, a new constitution, elections and counterterrorism, noting that the last point, which was included at the delegation’s insistence, had received the support of all parties except “the so-called Riyadh delegation.”

Jaafari stressed that the agenda was not discussed, only agreed to. "As of now, nothing has been adopted. Nothing is final yet, except the agreement on the agenda, which is the only thing we achieved during this round," he said.

Jaafari added that the agreement was reached after seven days of intense talks with United Nations Special Envoy for Syria Staffan de Mistura. He said the government delegation was able to “impose a rational and balanced agenda that was in the best interest of the Syrian people.”

He noted that the main focus of the negotiations was the issue of counterterrorism, which will be discussed more thoroughly in the coming rounds as it has become a point on the agenda. He added that the other points only received cursory attention while the issue of elections was completely left out of the discussion as “it is linked to the constitution, which in turn is linked to the upcoming all-inclusive national government.”

Jaafari continued to say that his delegation and de Mistura had exchanged feedback and amendments on a “non-paper” that was drafted by de Mistura and his advisor Vitaly Naumkin based on the delegation’s earlier paper “Basic Principles for Political Settlement in Syria.”

Jafarri noted that the non-paper will be discussed in light of the amendments and will have to receive approval from de Mistura before being passed on to the other parties.

Jaafari also observed that the government delegation hopes this paper will become the foundation for a common vision on Syria’s future to allow discussion of the agenda to proceed on a national basis, with foreign interests excluded.

“To put it differently, this paper is more like an attempt at having a common reading of the Syrian reality between us and the other delegations that believe in the Syrian national solution,” said Jaafari.

He added that the government delegation informed de Mistura that the timetables mentioned in United Nations Security Council Resolution 2254 needed to respected. "All the parties interested in the successful implementation of the rules of this resolution are accountable for ignoring these timetables," Jaafari said, adding that de Mistura was also in one way or another personally responsible for disregarding the schedules.

He explained that these timetables were violated even before the talks started in Geneva. The issue of the constitution, which was supposed to be addressed within six months since the resolution was adopted, is yet to take place, Jaafari said.

Jaafari also criticized the “Riyadh group," one of the opposition platforms, pointing out the group’s political immaturity for “fooling around” when making statements.