In a series of operations, the Syrian army, in coordination with the air force, destroys Nusra Front positions and munition depots in Hama and Idleb, killing several terrorists 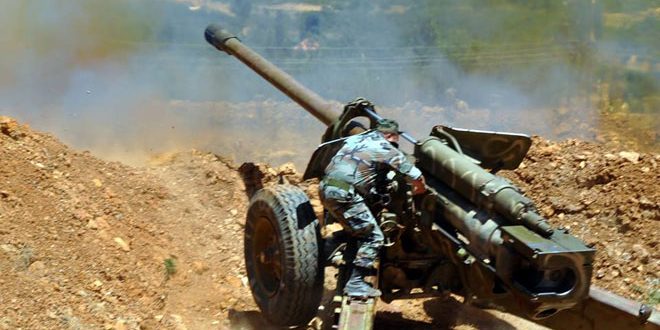 Syrian army formations with air force backing carried out operations against gatherings and supply routes of Nusra Front terrorists in the countryside of Hama and Idleb.

A military source told SANA that the air force launched airstrikes against Nusra Front militants' gatherings and depots in Kafar Nubbul city in Maaret al-Nouman area, 50 kilometers to the south of Idleb city.

The airstrikes killed a number of terrorists and destroyed a depot containing ammunition, IEDs and rockets, as well as three vehicles equipped with machine guns. Among the killed terrorists identified by name were Marwan al-Aswad, Mahmoud al-Sultan and Omar al-Sweid.

In another offensive on Taybet al-Imam city in the northern countryside of Hama a number of militants were killed or injured.

In the southern countryside of Idleb, the Syrian army's artillery launched a series of strikes against gatherings and hideouts of Nusra Front terrorists in Sfohen village and Al-Tamanaa town, killing four militants, injuring seven others and destroying two vehicles.

The reporter noted that many of the Nusra Front terrorists were killed and injured in airstrikes against their hideouts and movements south of Khan Shaikhon city.