Following a terrorist attack that struck Damascus city, the Syrian government calls on the U.N. to issue a statement of condemnation and urge certain states to stop sponsoring terrorism 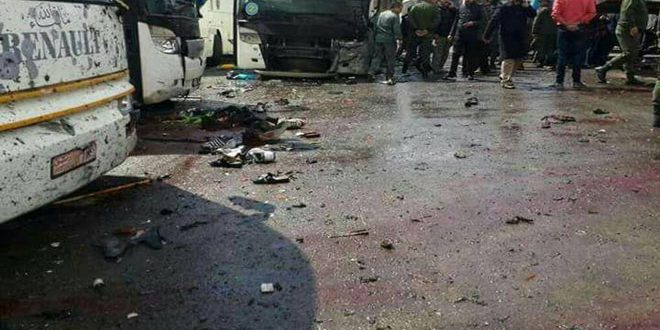 Syria demanded that the United Nations secretary general and chairman of the Security Council condemn the two terrorist bombings that took place in Damascus city on Saturday afternoon.‫

The Foreign Ministry addressed letters to the U.N.'s top officials informing them that two civilian vehicles were targeted on Saturday with two devices packed with highly explosive materials in Bab Mousalla area, leaving more than 40 civilians dead and over 120 injured.

This “cowardly” act of terrorism coincided with the terrorist groups targeting Damascus neighborhoods with dozens of rockets and mortar shells, leaving a large number of civilians dead and injured and causing massive damage to the public and private properties, mainly hospitals and schools, letters from the ministry noted.

They added that this attack came in retaliation for the victories which the Syrian army has achieved against Islamic State (ISIS) and the Nusra Front and other affiliated terrorist organizations in areas including Deir Ez-Zor, Palmyra, northeastern Aleppo and the countryside of Damascus.

The attacks also demonstrate the terrorist groups’ rejection of the reconciliations taking place in several areas, the ministry said.

In the letters, the Foreign Ministry demanded the U.N. secretary general and the Security Council issue statements in condemnation of this terrorist attack. It also asked the U.N. secretary general to put pressure on the governments of Turkey, Saudi Arabia and Qatar, as well as some Western states, which support these terrorist organizations, to stop all forms of support to these organizations in compliance with the U.N. and the Security Council resolutions no. 1267 in 1999, 1373 in 2001, 2170 in 2014, 2178 in 2014, 2199 in 2015 and 2253 in 2016.