Army units clear compromised areas north of Jobar from the Nusra Front, killing many terrorists and several leaders, while destroying their weapons in the process 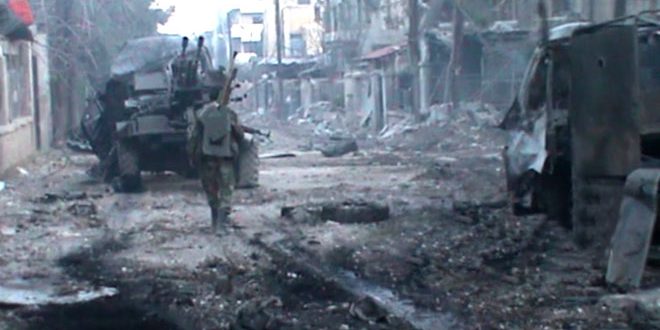 A military source announced that the Syrian army recovered the areas infiltrated by Nusra Front militants and affiliated groups around the Maamel area to the north of Jobar on the eastern outskirts of Damascus City.

The source told SANA that over the past few hours, army units carried out a number of military operations, restoring all the compromised locations. The source said that the military operation focused on the areas from which the Nusra Front terrorists and affiliates started their attacks, adding that the operation was swift and decisive as it was carried out with a high coordination between all participating units in record time.

The source also stated that a large number of terrorists were killed in the operation including some of their leaders and a number of foreign terrorists, adding that a number of their command centers, depots of arms and ammunition, booby-trapped vehicles and machinegun-equipped vehicles were destroyed in the process.