Army forces succeed in maintaining siege on terrorists trapped in Jobar as clashes intensify in the Damascus neighborhood, resulting in hundreds of killed and injured militants, pro-government newspaper reports 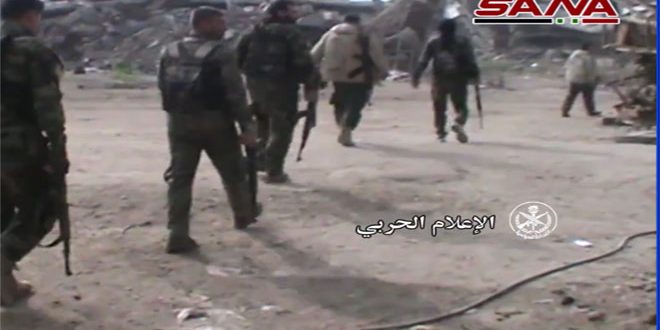 The Syrian army on Wednesday foiled attempts by fighters from the Nusra Front and other terrorist groups to break the siege imposed on militants trapped in the textiles factories north of Jobar on the eastern outskirts of Damascus city, according to a military source.

The source said that army units were engaged in violent clashes with terrorist groups north of Jobar, and that they are shelling the terrorist positions in the neighborhood and its surrounding areas.

The source added that the operations in Jobar have resulted in the death of more than 150 terrorists, including foreign fighters and some commanders, in addition to injuring hundreds of them, destroying three car bombs, and killing seven suicide bombers before they could reach army positions.

Meanwhile, a SANA reporter said that the Syrian air force carried out a number of airstrikes targeting terrorist positions and supply routes between the Eastern Ghouta and north of Jobar, causing many casualties.

The reporter said that clashes continue between army forces and terrorists that infiltrated the Maamel area on the northern outskirts of Jobar on Tuesday, leaving many of their members dead and injured, as well as destroying the militants' weapons and equipment.

In Hama, a military source said that the Syrian army and allied forces foiled an attack by the Nusra Front on Souran and Khattab in the northern Hama countryside.

The source also reported that army units were engaged in fierce battles on the outskirts of Souran city and in the surroundings of Khattab town, inflicting heavy losses upon terrorists.