Syria's top diplomat hits back at accusations of Assad regime involvement in Tuesday's chemical attack, pointing out that much of the outcry over the incident is coming from countries with a history of conspiring against Syria, government media reports 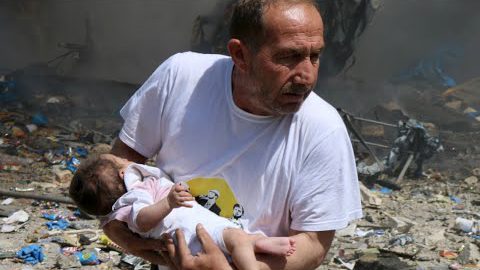 Foreign Minister Walid al-Muallem has questioned the timing of the international campaign against Syria, which accuses the government of using chemical weapons in Idleb province while ignoring terrorist attacks in Jobar and the northern countryside of Hama over the past weeks.

Addressing journalists in a press conference Thursday, Muallem said: “Terrorists launched attacks in Jobar and Hama countryside before the fifth round of Geneva, and the [Saudi-backed] delegation had only one demand in Geneva which is to come into power.”

The foreign minister said that when the opposition failed in its attempts it concocted the lie of chemical weapons use by the Syrian army in Khan Sheikhoun.

Muallem added that the strike would have created a blast diameter 1 kilometer wide if Syrian warplanes used chemical weapons.

He stressed that the Islamic State (ISIS) and Nusra Front terrorist organizations have continued to store chemical weapons in cities and inhabited areas.

This international outcry emanates from the states which are well-known for conspiring against Syria, Muallem pointed out.

He stressed that the Syrian army has never and will never use such type of weapons, even against the terrorists who target civilians.