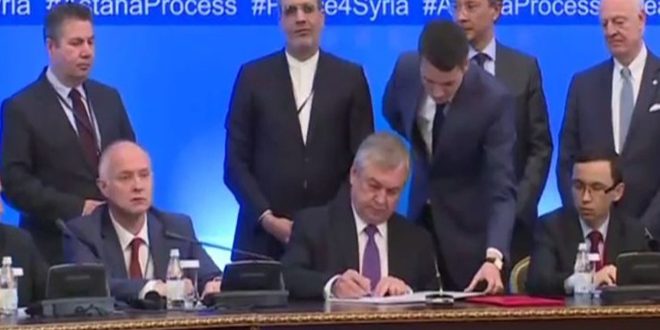 All three guarantor states of the cease-fire agreement in Syria signed on Thursday a Russian proposal on establishing four de-escalation zones in the war-torn country.

Speaking at a press conference after the signing, head of the Syrian delegation to the Astana talks Bashar al-Jaafari said he hoped that Russia and Iran would discuss the details of the de-escalation plan with Damascus as soon as possible.

Jaafari also extended thanks to Kazakhstan, Russia and Iran for their efforts regarding “this big achievement,” adding that it will help open the door for a political solution in Syria.

Russia’s lead negotiator at the Astana meeting Alexander Lavrentyev told reporters that the signing of the agreement will help preserve Syria’s territorial integrity and usher in a political settlement.

Lavrentyev stressed that the guarantor states of the cease-fire agreement in Syria had approved the possibility of including foreign observers within the de-escalation plan.

He noted that starting May 6, the cease-fire will be enforced in the four areas included in the new agreement.

United Nations Special Envoy for Syria Staffan de Mistura described the agreement as a step in the right direction toward consolidating the nationwide cease-fire.