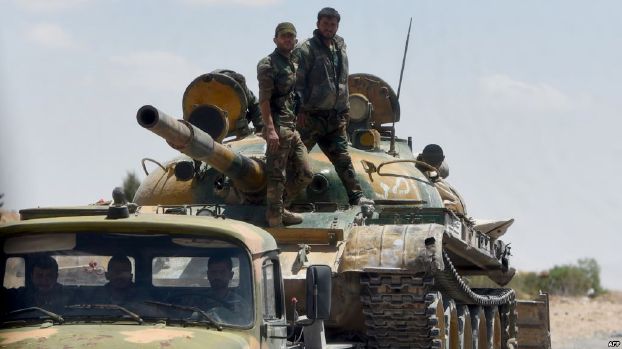 Regime forces backed by allied militias continued military operations against the Islamic State (ISIS) group in the eastern countryside of Raqqa between Jabal al-Bishri and the southern banks of the Euphrates River.

The Syrian Observatory for Human Rights reported that regime forces had advanced and were able to expand their control at the expense of ISIS in the eastern and southeastern countryside of the city of Raqqa, after the group was expelled from the southwestern countryside on July 17.

Over the last few days, regime forces were able to take control of the town of Al-Rasafa and the entire western section of the southern Raqqa countryside before striking toward the east from two main directions: First, toward the southern Euphrates banks and the Raqqa-Deir-ez-Zor road near the Huwija Shanan area, and second, toward the administrative boundary between Raqqa and the northwestern Deir-ez-Zor countryside. Regime forces have reached about 9 kilometers from this border, the closest regime forces have come to the Deir-ez-Zor border from the Raqqa side.

This advance has drawn new zones of influence between regime forces and their allied militants backed by Russia on the one side, and the Syrian Democratic Forces backed by the U.S.-led international coalition on the other. The developments come amid a shift witnessed by the Syrian Observatory through the exchange of roles between the international coalition and Russia, as the coalition forces have stopped their raids on the eastern countryside of Raqqa and parts of the northwestern Deir-ez-Zor countryside with their place taken by Russian planes, which have carried out dozens of raids targeting villages under ISIS control on the southern bank of the Euphrates River and extending from east of Huwija Shanan to the border with Deir-ez-Zor, since July 18.

In parallel, a Syrian military source said that the regime forces had currently stopped 30 km from Raqqa city.