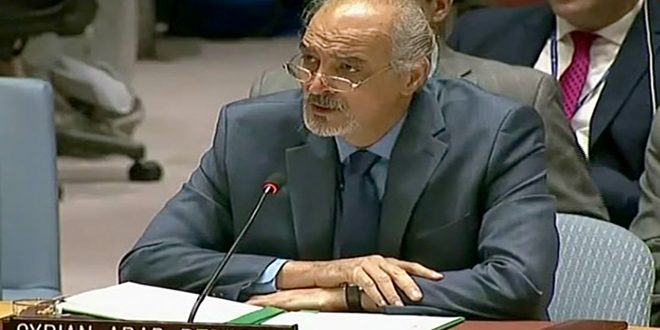 Syria’s ambassador to the United Nations Bashar al-Jaafari has accused Israel of targeting Syrian army positions while continuing to provide support to terrorist groups across the occupied lands.

In a statement during a U.N. Security Council session on Tuesday, Jaafari restated Syria’s stance in favor of the Palestinian people’s right to self-determination, establishing their independent state with Jerusalem as its capital and guaranteeing the refugees’ right to return.

Regarding the recent Israeli measures in Jerusalem and its holy places following tensions at Al-Aqsa Mosque, Jaafari said that the international community should do more than condemn Israel for its actions and urge an end to the Israeli occupation in line with U.N. resolutions.

Jaafari also criticized U.N. Middle East envoy Nickolay Mladenov, saying that nothing justifies ignoring the nature of his mission and mandate as a special coordinator for the Middle East peace process, claiming that Mladenov has long ignored Israel’s illegal practices and violations in the occupied Syrian Golan Heights.

He elaborated that the Syrian people are still subject to ugly crimes due to Israel’s policies against them, adding that Mladenov has ignored Israel's direct support for armed terrorist groups in the Golan Heights, including the Nusra Front and the Islamic State (ISIS).

Jaafari questioned whether Mladenov had heard about Israel’s intention to carry out illegal elections in the occupied Golan Heights according to Israeli laws. Security Council resolutions reject the Israeli annexation of the occupied Syrian Golan and consider all Israeli activities in the occupied area null and void.

The Syrian diplomat also called on the Security Council ensure the immediate liberation of Syrian prisoners, in particular Sudqi al-Maqt, stressing that the Council must shoulder its responsibility to end the Israeli occupation of the Arab territories instead of holding useless periodical discussions.