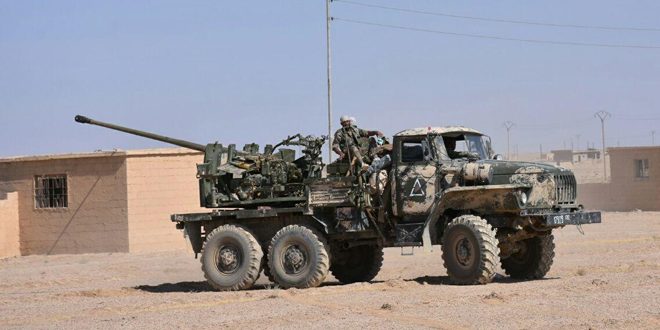 The Syrian army expanded its control over the southeastern outskirts of Deir-ez-Zor city after breaking the Islamic State (ISIS) siege on the military airport.

SANA's reporter in Deir-ez-Zor confirmed that army units broke the siege after launching operations in the area surrounding the village of Jafra, achieving a new advance that will enhance security around nearby residential neighborhoods and military points.

The reporter added that operations in the countryside of Deir-ez-Zor were conducted from the ground and the air, with airstrikes hitting ISIS positions in the villages of Al-Jneina, Ayash, Al-Bugheiliya, Hatla, Al-Hweiqa and Mabar al-Jafra.

According to SANA's reporter in Hama, an army unit ambushed a group of terrorists in Wadi al-Azb in the countryside of Salamiyah, detaining 25 militants and seizing their weapons and ammunition.