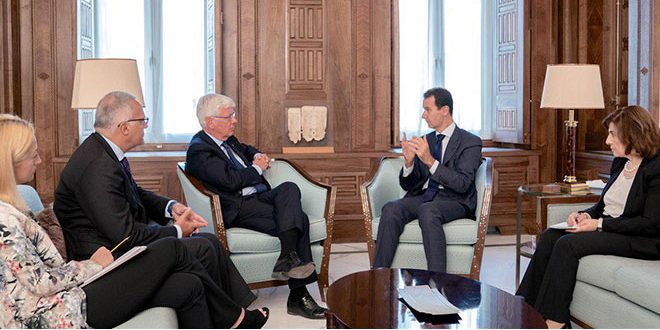 Syrian President Bashar al-Assad has called out Western nations for continuing to support terrorism in Syria, in spite of the blowback witnessed in many of these countries.

Assad's comments came during a meeting on Sunday with a visiting Italian parliamentary delegation, headed by Paolo Romani.

The president said that Western governments are still supporting terrorist groups in Syria, either directly or indirectly, despite the fact that the people of these countries have begun to suffer from the backfiring of this policy.

Talks during the meeting also dealt with the negative and misleading image portrayed by the Western media during the course of the seven-year conflict.

Assad said that the visiting MPs could play a significant role in changing European public opinion toward events in Syria, now that they have become aware of the lies peddled by the Western mass media.

He added that this could also help in working toward lifting the economic siege that has increased the suffering of Syrians and has negatively affected livelihoods.

For their part, the Italian MPs acknowledged that the terrorism striking Syria for years has now started to affect a number of European countries and poses a real threat to the security, safety and future of their citizens.

They said that they will spare no effort in working to lift the sanctions and convey the reality of events in Syria when back in their countries and in the rest of Europe.