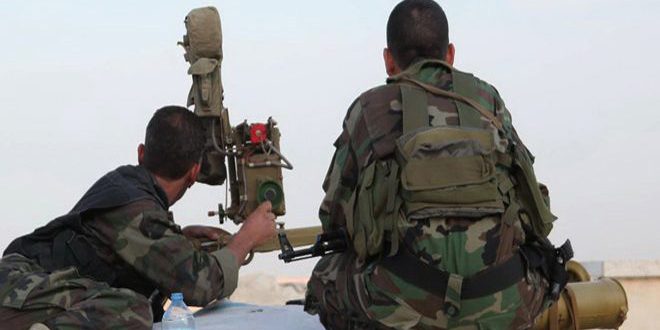 The Syrian army and allied forces on Tuesday thwarted attempts by Nusra Front-linked terrorist groups to infiltrate a number of axes in the northern countryside of Hama, according to a military source.

The source told SANA that government forces engaged in heavy clashes with the Nusra-affiliated fighters near the villages of Maan and Al-Tleisia, killing and injuring a large number of the fighters.

The source added that clashes are still continuing in parallel with artillery and air strikes against the militants' positions in the area.

SANA's reporter said that the terrorists linked to Nusra and the Turkistan Islamic Party, which has links to Turkish intelligence, attacked army posts in the surroundings of Al-Tleisia, Al-Talla, Al-Sawda and Al-Kahira located north of the city of Hama.