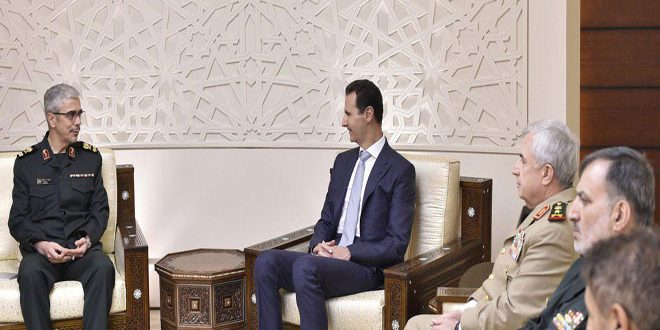 President Bashar al-Assad said Syria's citizens and armed forces are the "main partner" in the victories against terrorism facing the country, adding that this success “deals a severe blow to the Western projects plotted against the region.”

This, the president said, explains the persistent conduct of some countries who continue to support terrorist groups in Syria and the region.

Assad's remarks came during a meeting with head of the Iranian armed forces Maj. Gen. Mohamad Bagheri, in which the Syrian president was congratulated on the fight against terror in a letter from Iranian Supreme Leader Ayatollah Ali Khamenei.

The meeting touched on the brotherly relationship between Syria and Iran, chiefly the military cooperation, which has witnessed progress in the course of the war Syria is fighting alongside its allies, particularly Iran, against terrorism.

In turn, Bagheri said his visit to Syria aims at setting up a joint strategy on further military coordination and cooperation following the great achievements made on the battlefield.

He said Iran is determined to continue its support to the people and leadership of Syria until security and stability are restored to the country, while also providing all possible assistance to the process of reconstruction.