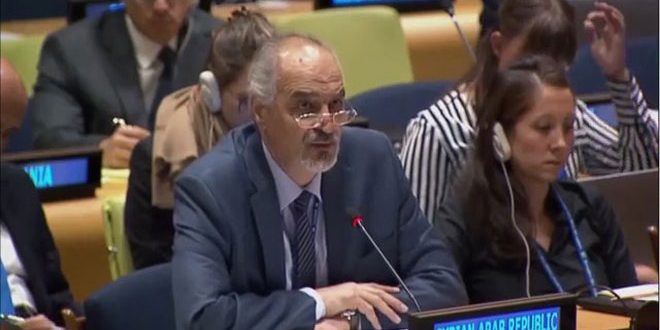 Syria’s ambassador to the United Nations has accused permanent U.N. Security Council (UNSC) members of encouraging war crimes and crimes against humanity in the region by providing support to Israel.

During a UNSC session held Wednesday on the situation facing the region, Bashar al-Jaafari said Syria's sovereign right to its land in the occupied Syrian Golan region would not be subject to negotiation or concession, adding that Israeli settlers would have to leave sooner or later.

“We will not give up our right of restoring our occupied land and will liberate our citizens under the Israeli occupation in the Syrian Golan by all means, including the international law charter and principles and the UNSC resolutions,” he said.

Jaafari said that the silence from member states toward Israeli policies has encouraged the Jewish state to violate international agreements by supporting armed terrorist groups like the Nusra Front and the Islamic State (ISIS) in the Golan.

“It facilitates the terrorists’ capture of UNDOF sites in a way that threatens lives of the forces, as members of Fijian and Filipino units were kidnapped,” he said, referring the the United Nations observer force deployed to the area.

“Syria believes that there is still a historical responsibility for the UNSC by correcting the track of the compass through adopting prompt procedures of putting an end to the Israeli occupation of the Arab territories including the occupied Syrian Golan,” he concluded.