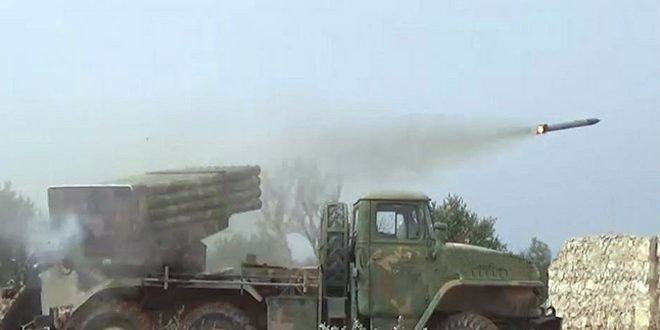 Army units re-took the neighborhood of Al-Sinaa in Deir-ez-Zor city after eliminating the remaining Islamic State (ISIS) terrorists in the district.

SANA’s reporter in Deir-ez-Zor said that the Syrian army combed the neighborhood and set up military checkpoints in preparation for launching new operations to root out ISIS militants from other neighborhoods.

The reporter added that government forces carried out operations in several neighborhoods, inflicting heavy losses among the group's fighters.

In the eastern countryside of the province, Syrian army and air forces progressed in their operations against ISIS in the village of Huweijit Saqar after killing a number of terrorists.

Meanwhile, in the eastern countryside of Hama province, Syrian warplanes targeted a convoy of heavy vehicles belonging to the Nusra Front terrorist group.

SANA’s reporter added that the strikes resulted in the death of fighters, in addition to the destruction of eight trucks loaded with tanks and heavy weapons.