Top advisor to President Assad meets with members of the U.K.'s House of Lords to discuss Britain's stance against Syria, SANA reports 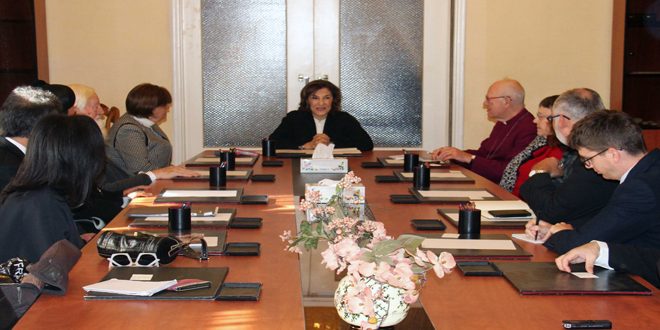 Presidential political and media advisor Bouthaina Shaaban on Tuesday said that all countries have an obligation to support Syria in its war against terrorism, saying that the United Kingdom must reconsider its policy toward Syria and the region.

Speaking to the press after a meeting with a delegation from the British House of Lords, Shaaban called on Western publics to raise their voices and stand up against the incorrect policies of their governments.

She said that the Syrian government will not be subjected to extortion or the lies propagated by supporters of the Zionist plan or those who seek to destabilize Syria, adding that all countries must stand with Syria against terrorism, as terrorism knows no boundaries.

Shaaban explained that the delegation’s visit is important for communication between the British and Syrian people in order to break the media blackout and distortion that tries to falsify facts, adding that such visits have become an essential way to learn about the reality of events on the ground for the world to hear.

Other delegates said that they rejected their country’s policy toward Syria, expressing eagerness to hear the facts that Syrians want to deliver to people in the West.