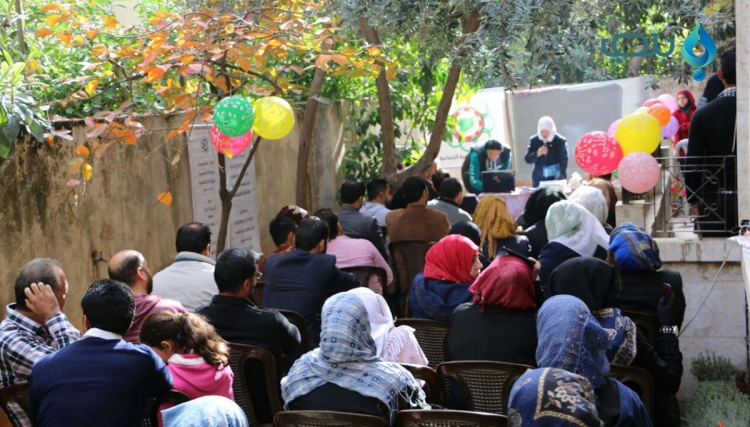 Nine years ago, when the Syrian revolution had not yet made its way onto the streets, another revolution changed the life of rights activist Wadad Rahal and pushed her toward social change.

“In the juvenile welfare center I saw children bearing what men did not have the strength to bear,” Rahal told Enab Baladi, describing the scenes which convinced her of the importance of working in the field of human rights defense. She was working at the time as a member of the board in an association in Raqqa, and described the center as “prison-like.”

Along with her academic study in the rights field, this shift in Rahal’s thinking was the key to her activities after the Syrian revolution, as the scope of her work expanded and turned into field. Through this, she participated in reviewing the human rights situation for those affected by war supporting people with the strength to gain their rights.

Rahal today manages the “Youth for Social Development” association in the city of Idleb as a framework which brings together young men and women with the aim of making a difference in the political, social and cultural awareness of the youth.

The association which Rahal administers is not the only one working in the human rights field, as in Idleb province there are five legal organizations and support groups, according to the “Syrian NGO map” on the Citizens for Syria website.

Idleb’s organizations join 53 others working in the same field in Syria and areas where Syrians are in the neighboring countries.

Women are a priority for most of the groups working in the human rights field as they are a “vulnerable category,” with some of them trying to establish a presence in organizational and administrative staffs, if only in small numbers.

Rahal believes that the change which these organizations could create in building society and their way of dealing with issues of women and outstanding rights cannot happen “in a day and a night,” but needs time and effort.

After she spent most of her time in administrative work in human rights groups and field activity, about two years ago Rahal was able to bring her hopes further by giving women a chance for participation in politics, a field which had long been monopolized by men.

“In the beginning, we faced many difficulties in this field,” Rahal told Enab Baladi’s correspondent in Idleb. “It is very difficult for women to speak for the first time in this field, widely and among the organizations present in the community.”

But the issue has changed around eight months after the start of the project, she said, and a great deal of positive results have begun to show, encouraging her to continue.

Although the Syrian political field is not devoid of women, their rate of representation in parties and politics is weak compared with men. This is largely related to society’s view of women and the degree of trust which it gives to them in politics and work in civil affairs.

Rahal believes that change which she has helped to create over the last nine years has been small compared with her ambitions, but she believes that social work and organizations coming together will have to create an “important difference” in the near future.