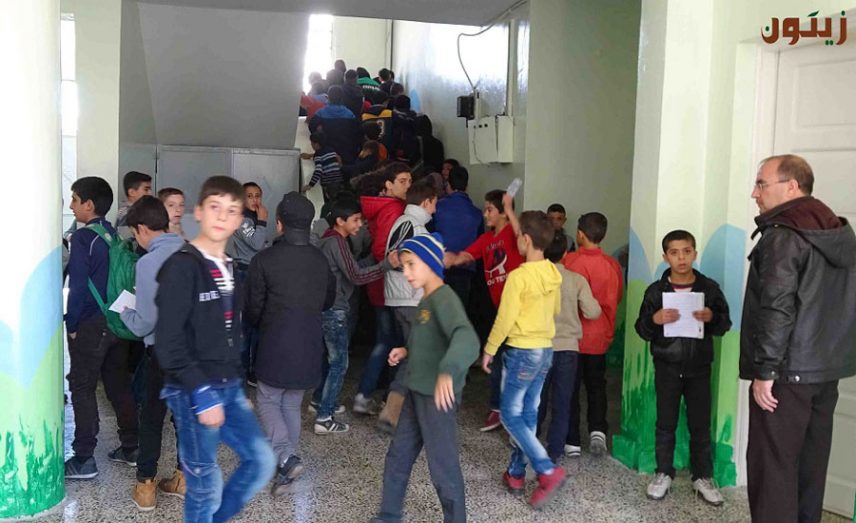 Every morning, 10-year-old Ahmed renews his refusal to go to his school in the city of Maarat al-Nouman in the southern Idleb countryside, complaining of the heavy layers of clothes in which his mother dresses him to avoid the severe cold in his classroom.

Students and administrations of Idleb province complain of the lack of heaters in their classrooms, as well as the lack of repairs to their windows and doors to keep the cold winter from the children.

The director of the Dhee al-Nourain primary school in Maarat al-Nouman, Zuhair Zikri, told Zeitoun: “The school is still without heaters and the students are taking their classes in cold weather, which reduces their ability to focus on their studies. After we were in touch with the Syria Relief organization for school support, they promised to give us heaters in the coming week.”

Zikri said that every classroom needs about 3 to 5 liters of diesel for heating every day, depending on the weather, adding that the fuel given the previous year was not enough to last until the end of winter. He added that the severity of the cold caused children to drop out of school and parents did not want their children to catch winter illnesses, especially in light of the difficult living conditions they were enduring.

Responding to a question about the steps taken by the Free Education Directorate and education officials in Idleb province, the former deputy education minister for the interim government, Jamal Shahoud, said that heaters had been secured for 1,000 classrooms in Idleb province with continuing efforts to secure fuel for the remaining schools. He attributed the reason to the lack of time and the large number of schools.

Mustafa Tenari, an English teacher in a primary school in Maarat al-Nouman, complained about the lack of diesel from charity groups, stressing that the education conditions are one of the most important reasons for the success of the educational process — as well as the illnesses that the cold could cause for students.

Abdel Nasser Zikri, a teacher, warned about the degradation of the education process if the necessary fuel is not provided to ensure students are warm, which has not yet arrived despite the severe weather. He pointed to their suffering over the last year due to the scarcity of diesel in schools.

Rabaa al-Sayad, a teacher in the Abdel Maati al-Kurdi school, added that the classrooms in the school needed to repair their windows and doors, adding that the lack of heater so far had been a major reason for students having difficulty in learning.

Ahmed, who was prevented from going to his school until they installed a heater in his classroom, told his mother, Mariam al-Sadiq, that he was ready to go even on weekends if there was a heater in the classroom.