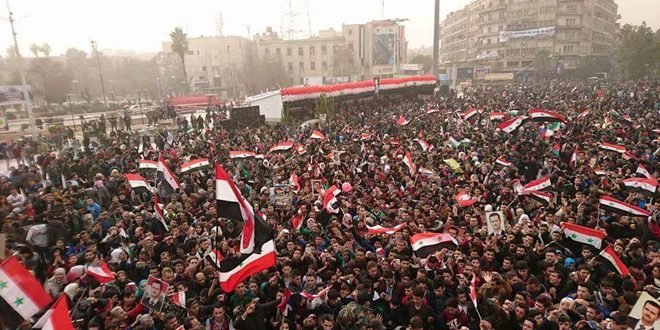 A public celebration was held in Aleppo on Thursday to mark the first anniversary of the city’s victory over terrorism.

The event was attended by official and popular figures together with martyrs’ families.

Thousands gathered in the central Saadallah al-Jabiri Square and nearby streets with participants raising the Syrian flag and banners saluting the Syrian army.

The celebrations included a military parade with the participation of the Scouts of Aleppo, the General Sports Union and children of the local branch of Al-Baath Vanguards Organization.

Information Minister Mohamad Ramez Tourjman said that Aleppo’s people have remained steadfast in their homes despite all the suffering they experienced due to the terrorist acts. Tourjman also saluted the national and resistance media, which he said was a partner in the victory.

In turn, Aleppo Governor Hussein Diab stressed that the victory of Aleppo was achieved thanks to the steadfastness and sacrifices of its people and their solidarity with the Syrian army, pointing out that this victory was a strategic shift in the war on terror and its supporters.