Iranian and Syrian officials meet on the sidelines of Organization of Islamic Cooperation meeting in Tehran, official media reports 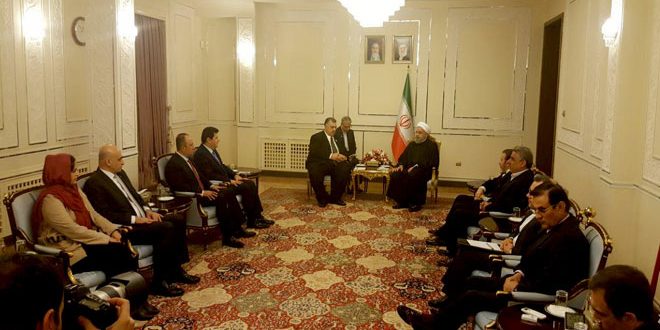 Iranian President Hassan Rouhani said on Tuesday that his country will continue supporting the Syrian government and people in their war on terrorism until the final battle victory is achieved.

Rouhani’s comments came during a meeting with Syrian Parliamentary Speaker Hammoudeh Sabbagh, who heads a Syrian delegation to the Organization of Islamic Cooperation conference, which kicked off on the Iranian capital of Tehran on Tuesday.

The Iranian president also denounced the illegal presence of American forces on Syrian soil, which violates international laws and norms, indicating that Washington is leading a conspiracy against the sovereignty and unity of Syria and against the entire region.

He also stressed the importance of continuing the fight against terrorism and facing foreign intervention.