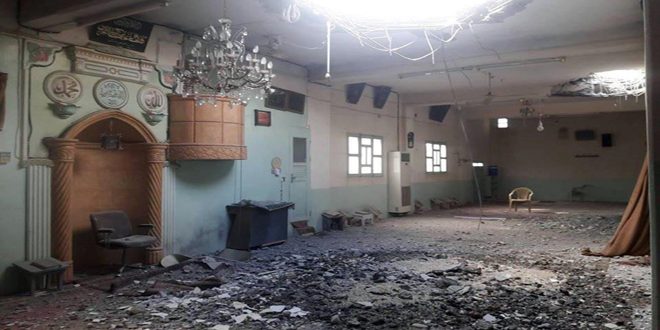 For the ninth day in a row, Turkish forces continued their aggression on citizens’ houses, places of worship and archeological sites in the Afrin area and surrounding villages in Aleppo’s northern countryside.

Local sources told SANA that the Turkish forces bombarded displaced people in the nearby village of Qabli, killing at least three civilians and wounding four others.

The Turkish forces committed another massacre in the village of Khalil in the Sheikh Hadid area, claiming the lives of a number of civilians and injuring many others, according the sources.

The sources added that the Turkish forces targeted Balbla, Al-Maabatli and Hamam in the area of Afrin, killing and injuring a number of civilians, including an elderly person, in addition to causing material damage to property.

Earlier, the Turkish forces shelled with heavy weapons the villages and towns in Jandaris, 63 km north of Aleppo city.

The sources indicated that the Turkish aggression led to the destruction of a number of houses and shops, in addition to destroying the Salahuddin al-Ayyubi Mosque and the Jandaris cemetery in the southwestern countryside of Afrin city. They added that the aggression also caused huge damage to infrastructure, particularly to the sewage system and water and electricity networks.

The General Directorate for Antiquities and Museums at the Ministry of Culture said that the aggression on archeological sites in Afrin resulted in the destruction of the Aramean Ain Dara Temple, which dates back to the first millennium BC.

During the first week of the Turkish aggression, 86 civilians have been killed and 198 have been injured, including children, women and elderly. Huge material damage has also been caused to infrastructure, with movement stopping throughout the area of Afrin and its surrounding villages due to the heavy shelling.