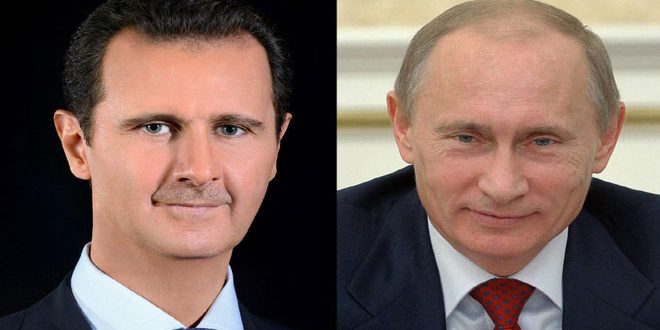 President Bashar al-Assad sent a cable to Russian President Vladimir Putin congratulating him on winning the presidential elections with more than 70 percent of votes.

In the message, Assad said having this exceptional trust from the Russian people is a natural result of Putin’s distinguished patriotic performance and his serving the Russian Federation’s interests with the utmost competence and faithfulness.

Assad said that under Putin’s leadership the Russian Federation has stood against terrorism in words and actions, contributing commendably with the Syrian army in vanquishing takfiri terrorist forces in most of Syria.

The Syrian president added that Putin was honest in his positions, which leave no room for hypocrisy or ambiguity, asserting that Russia’s stance in international forums and circles reflects the pulse of its people and of all those who aspire to realizing justice among countries on the basis of equal dignity for all states, whether small or large.