In north Syria, armed groups are coming to terms with the outcomes of the Ghouta and Afrin offensives 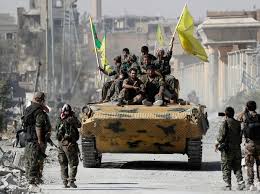 1. The Syrian Democratic Forces is sending a convoy of military reinforcements to the city of Manbej (80 km northeast of Aleppo) in northern Syria. A source in the Kurdish "Asayish" police east of Manbej told Smart News Agency that the military convoy includes fighters, armored vehicles, and trucks loaded with ammunition. The convoy was seen crossing the Karkuzaq bridge to Manbej. [Source: Smart News Agency]

2. Faylaq al-Rahman said it is discussing with Turkey and the FSA settling people displaced from the Ghouta in the Afrin region. A Faylaq al-Rahman spokesman told Smart that they are trying this option because Afrin has recently become under the FSA control and is "far from the factional responses and the enormous congestion like Idleb." [Smart News Agency]

3. The SDF is handing over dozens of houses taken north of Raqqa to displaced people from the Afrin area. An SDF spokesperson told Smart that the Kurdish People's Protection Units' (YPG) intelligence services, in cooperation with PYD, began distributing dozens of houses that it had annexed for the "public property" after the expulsion of the Islamic State (ISIS) group. [Smart News Agency]