Some 6,000 men and youths have been placed in the Al-Duwair center, amid reports of poor humanitarian conditions, according to Zaman al-Wasl 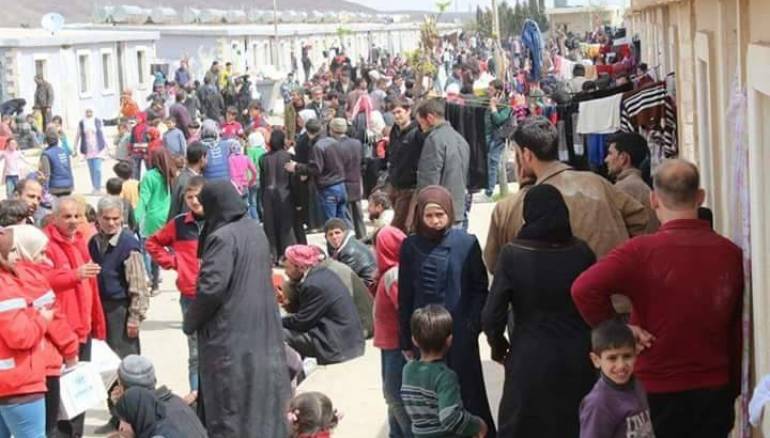 As more than 105,000 people have been evacuated from the Eastern Ghouta suburbs, activists say the evacuees are suffering harsh humanitarian conditions in the mass detention camps.

Thousands of people have been transferred to the Adra area northeast of the capital, where the regime has placed them in its facilities amid an absence of most essential services, local activists and relatives said.

Mohamad al-Basha (a pseudonym) said his relatives who fled the town of Hammouriyah had been placed in the Al-Duwair center with 6,000 other people.

Men and youth between 16-50 have been put in detention, according to Basha.

Russia's Defense Ministry said more than 105,000 people have left the Ghouta, including another 700 on Saturday, since regime forces began an assault to retake it a month ago, RIA news agency reported, citing the military.

About 1,700 people have been killed and more than 7000 wounded since the deadly offensive started on Feb. 18, local monitoring groups said, with about 90 percent of the Eastern Ghouta now back under regime control.

Hossam al-Masri (a pseudonym), a relative of a detainee in at the Al-Duwair center, said that the regime imposed strict restrictions on those wishing to visit relatives in the center, requiring several security permits.

Masri told Zaman al-Wasl that the regime has allowed number of families, mostly women and children under the age of 15, to leave to their relatives in Damascus.

Syrian rebels began evacuating a second part of the Eastern Ghouta on Saturday, regime-run media said, in the latest such deal this week for the former opposition bastion.