Mohamad Alloush says his forces sent denials to the media which were not reported, according to Alsouria Net 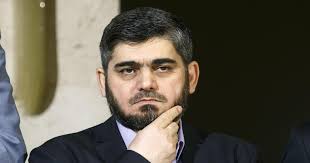 Jaish al-Islam in the Eastern Ghouta on Monday denied what had been reported by Russian media about fighters preparing to lay down arms and depart the city of Douma.

Russian media had quoted an official in the general staff in Russia as saying that opposition fighters in Douma, which is close to the capital Damascus, had expressed their readiness to stop fighting and leave.

In a series of tweets, an official in the political bureau of Jaish al-Islam, Mohamad Alloush, said: “Anyone who is publishing or discussing reconciliations in the Jaish al-Islam sector in the Eastern Ghouta is telling the regime’s story and expressing its wishes and is just its mouthpiece. There is no truth to this nonsense which some have repeated and is nothing but an attempt to wage psychological war on those who remain steadfast in the Ghouta.”

Alloush said in another tweet: “The psychological war is not lesser than the war on the ground and the enemy is using many rumors in this sense. What the RIA agency reported about an agreement between the Russians was published by media and channels despite us sending them messages denying it directly, which they did not publish. We confirm that this news is false in whole and in part.”

The first batch of fighters and civilians from the Faylaq al-Rahman areas in the south of the Eastern Ghouta departed on Saturday, heading to northern Syria in accordance with a deal with the Russians.

The fate of Douma, the last of the Ghouta cities under the control of the Jaish al-Islam, is still unknown with negotiations continuing with the Russians.

During the years of the war, many Syrian areas, including the cities and towns near Damascus, have seen the evacuation of thousands of opposition fighters and civilians in accordance with deals with regime forces as a result of the siege and heavy assaults, most prominently the eastern districts of Aleppo city at the end of 2016.