Defenses around the capital Damascus and Republican Palace are being boosted, according to Zaman al-Wasl 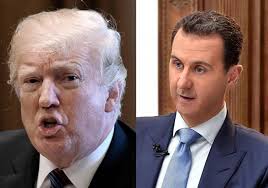 A well-informed source said Syrian regime forces are on alert amid fears of an imminent U.S. strike, resulting in the immediate deployment of its advanced air defenses around the capital and near the Republican Palace

Most advanced air defenses were deployed in Mezzeh military airport. The source said six defense systems were stationed, including the Russian Pantsir-S2 defense system, which is a combined short to medium range surface-to-air missile and anti-aircraft artillery weapon.

Syrian air force, backed by Iran and Russia, has been working on developing its air defenses since shooting down the Israeli F-16 in February.

U.S. President Donald Trump on Monday threatened a military strike against the Assad regime, declaring that Russia or any other nation found to share responsibility for Saturday's apparent chemical weapons attack on civilians in Douma town will "pay a price," AP reported.

The White House sharply rejected any suggestion that Trump's own words about pulling U.S. troops out of Syria had opened the door for the attack, which killed more than 40 people, including children.

Trump, asked whether Russian President Vladimir Putin bore any responsibility, responded, "He may, yeah, he may. And if he does it's going to be very tough, very tough." He added: "Everybody's gonna pay a price. He will. Everybody will."