With the conclusion of the siege and assault, children are resuming their education, SANA reports 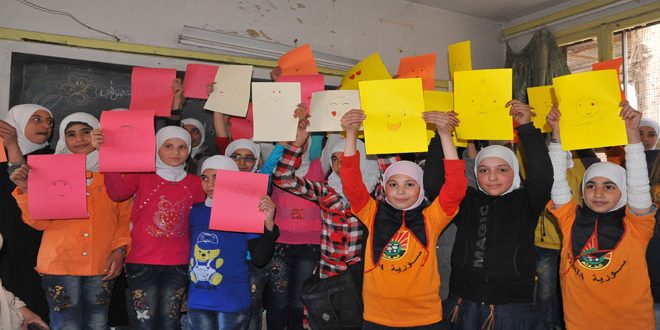 More than 10,000 students are expected to return to their schools during the upcoming few days in the towns of Eastern Ghouta, now a number of schools there have been put into service, with more to be renovated.

The educational staffs of these schools, in cooperation with a psychological support team, are providing special programs for children who have been subjected to terrorist practices.

Speaking to SANA, children of Saqba and Kafr Batna expressed joy after returning to school, which they were forcibly deprived of.

“I have not entered school for a year, and I have started taking actual lessons from today,” second-grade student Ahmad Zinati said.

In turn, headmaster of Saqba Secondary School Mansour al-Bunni said that about 1,500 students have been registered in the school, adding that the number is expected to increase despite the fact that the school suffers from a large shortage of teaching staff and various school supplies.

He pointed out that the educational process kicked off five days ago in Saqba.

For his part, supervisor of basic education in Eastern Ghouta Mohamad al-Bashash said that all services will be provided for the teaching process to commence as planned.

A teacher in Saqba town told SANA that the town has 10 schools, five of them currently equipped and ready to receive students, noting: “We are facing many obstacles and it is important to solve them, especially with regard to the legal age for the reception of students, in particular students of secondary and preparatory stages who have not been able to complete their studies previously.”

Eight schools have been opened in the towns of Saqba, Kafr Batna, Ayn Terma, Haza and Harasta since the Eastern Ghouta was liberated, according to the Educational Directorate of Damascus Countryside.