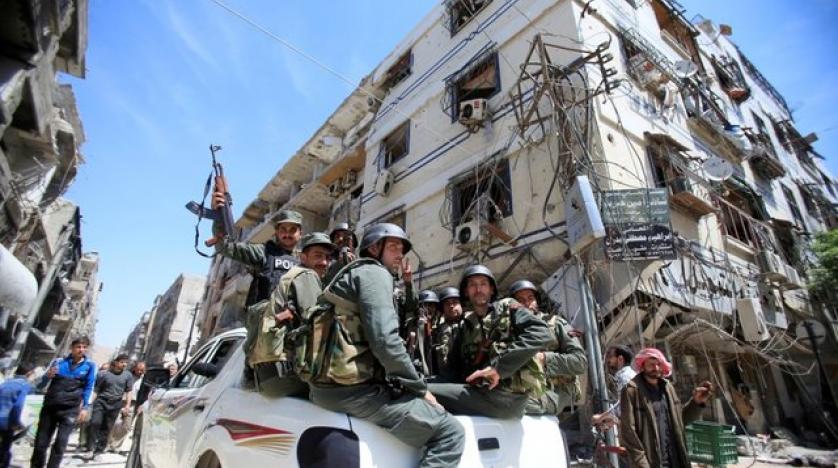 Israel struck an Iran-operated air base in Syria, a senior Israeli military official confirmed on Monday, as Israeli sources reported that Israel sent a clear message to Russia that the sale of the advanced S-300 missile defense system to the Syrian regime will cross a red line.

Meanwhile, Iranian Foreign Ministry spokesman Bahram Qassemi said his country will respond sooner or later to the recent crime and aggression of Israel.

"It was the first time we attacked live Iranian targets in Syria, both facilities and people," the Israeli military source admitted to the New York Times.

This is the first time an Israeli official has admitted to directly targeting Iranian forces in Syria, given that Israel usually refrains from commenting on any reports about targets.

The official indicated that Israel targeted the Iranian drone command center at the T4 air base in Syria on Monday, in response to an Iranian drone entering Israeli airspace earlier in Febraury.

During the attack, Israel killed 14 people, seven of which were Iranian advisers, including a colonel who led the drone unit operating out of T4, east of Homs.

The official noted that the armed Iranian drone that entered Israeli airspace "opened a new period," saying that “this is the first time we saw Iran do something against Israel, not by proxy."

This was the second time T4 was targeted. Round one occurred on Feb. 10, when an Iranian drone launched by a Revolutionary Guards Force operating out of the air base was shot down with a missile from an Israeli Apache helicopter that was following it after it penetrated Israeli airspace.

Reports stated that the drone’s flight path and Israel’s “intelligence and operational analysis of the parts of the Iranian unmanned vehicle” indicated that “the aircraft was carrying explosives” and that its mission was “an act of sabotage in Israeli territory.”

Israeli media outlets discussed how Israel's admission to the nature of the drone's mission brings the Israeli-Iranian conflict out into public.

The Russian Defense Ministry plans to reconsider supplies of S-300 systems to Syria, which according to Israeli reports is considered "crossing red lines."

In response, Qassemi said in his weekly press conference that the Israeli regime will sooner or later receive the necessary responses to its recent crime and aggression, and they will regret their misdeed.

Asked about Iran’s response to an Israeli attack on the T4 air base, Qassemi said the attack will be met with a response, emphasizing that Israel’s “hit and run” policy shouldn't be tolerated any more.

Later in his statement, Qassemi pointed out that one of the goals of the rash and unwise act of the U.S. and its two allies in breaching the sovereignty and territorial integrity of Syria was to create discord among the three guarantors of the cease-fire in Syria, in reference to Iran, Russia and Turkey, brokers of the Astana peace talks and guarantors of de-escalation zones in Syria.