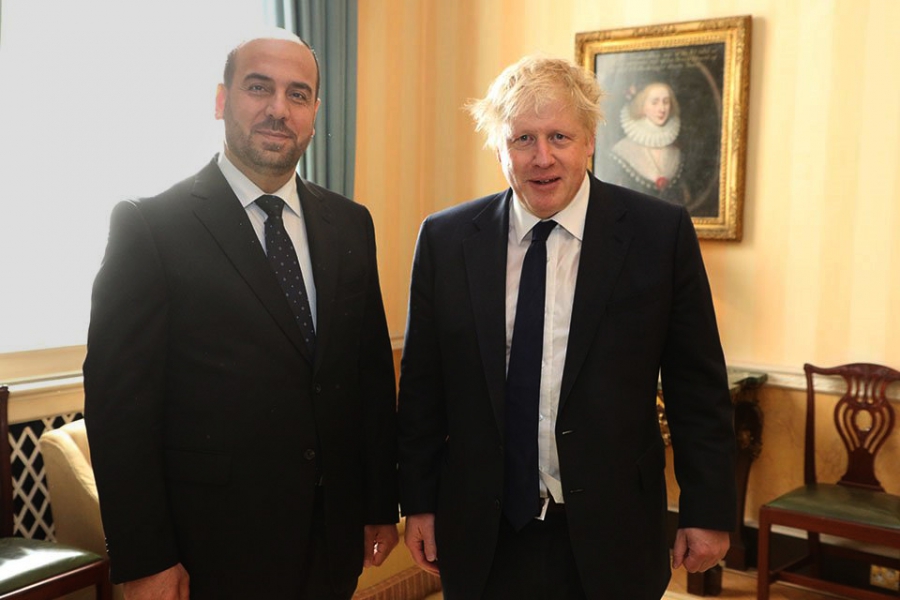 Head of the Syrian Negotiations Commission, Nasr al-Hariri, called on the United Kingdom to impose new sanctions on Russia and Iran because of their harmful role in Syria. He also called on the U.K. to support efforts to hold war criminals in Syria accountable instead of just investigating war crimes.

Hariri and the accompanying delegation met with Great Britain’s Foreign Secretary Boris Johnson in London on Wednesday as they discussed "the future of Syria and the role of the United Kingdom in helping secure a stable and peaceful future for the Syrian people."

Hariri gave an open briefing to members of the British parliament, the media and non-governmental organizations in which he stressed the need to undertake actions that can have a strategic impact.

Hariri called on the United Kingdom in particular to take the lead in increasing support for moderate voices on the ground, such as civil society organizations, local councils, and the Syrian Interim Government. He also called for moving from the stage of investigating the Assad regime’s violations to the stage of prosecutions and legal accountability.

Moreover, Hariri called on London to step up its humanitarian assistance for the Syrian people and support the United States in in the imposition of tougher sanctions against Russia and Iran for their harmful role in Syria.

For his part, Johnson said that "this visit was a significant opportunity for the U.K. to discuss with the Syrian opposition our shared efforts to bring this appalling human catastrophe to an end, and stop the suffering that the Syrian people have endured for over seven years.”

Johnson added that the Bashar al-Assad regime's "continuation of its brutal offensives, including its use of chemical weapons, and its refusal to engage in negotiations have underlined the challenge of reaching a political settlement."

"But we remain clear that only a political solution will create a stable, brighter future for the Syrian people," he said.