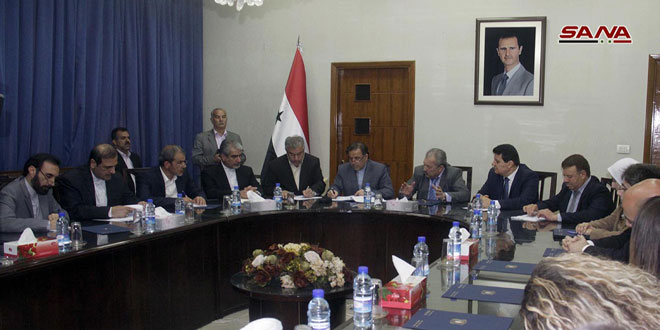 Public Works and Housing Minister, Hussein Arnous, discussed on Thursday with Iran’s Roads and Urban Development Minister, Abbas Akhoundi, the prospect of cooperation between Syria and Iran during the country’s rebuilding phase.

Arnous said that developing joint work between Syria and Iran is important for both countries in the upcoming reconstruction phase, especially since the Public Works and Housing Ministry is reviewing the organizational charts of cities and towns destroyed by terrorism.

He added that for the ministry to complete the construction in the best manner, it needs heavy equipment.

For his part, Akhoundi who is also head of the Joint Syrian-Iranian Economic Committee, asserted his country’s support for Syria in various fields and emphasised Iran’s readiness to contribute to rebuilding, developing, reconstructing, planning, and reorganizing the Syrian cities.

The Iranian minister and the accompanying delegation added that Iran has the necessary expertise in the field of building and establishing roads and bridges. He made particular calls for the slums to be upgraded and for the reconstruction of infrastructure.