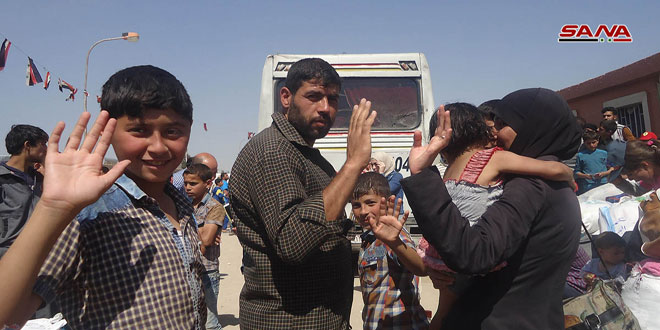 Rasha Hashem was busy putting her belongings in a small bag as she prepared to leave the apartment in the housing center of Herjalleh in the southern Damascus countryside, which she had shared with relatives for the over two months.

Rasha is one of scores of people who have returned to Saqba; her hometown in eastern Ghouta. Opportunities are available for other families willing to return to Ghouta’s liberated towns amid an accelerating pace of reinstated services.

Midway between her former temporary residential house and the entrance to the center, Rasha tells SANA’s correspondent, as her pace quickens in an attempt to catch up with her husband who arrived to the bus before her: “We have waited a whole day after it became certain that we can go back to Saqba. We will start over.”

Rasha joined her husband and four children on one of the several buses that had assembled at the entrance to the center. Her husband stood with bags full of their things next to him. “I miss Saqba terribly. I miss my family and Ghouta’s farms especially now that these are the apricot days.”

“I cannot contain my joy,” the father of four says, obviously at a loss for words. He then went on to explain that he is determined to get back to his former profession in the furniture industry, a common profession in Saqba town.

Mahmoud Sadeq, father of six, seemed fatigued as he struggled to pull a bag of food onto the bus which was about to set off. “I was reduced to tears when they told me I can go back to my house. Tears of joy.”