The acting Charge d’ Affaires of Syria’s permanent delegation to the UN, Munzer Munzer has lashed out at foreign powers who use the protection of civilians to further their own political goals writes SANA 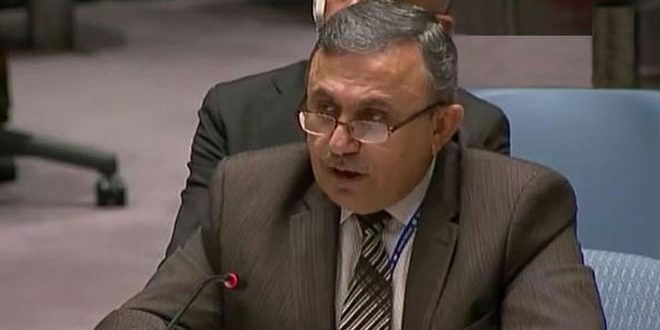 The acting Charge d’ Affaires of Syria’s permanent delegation to the UN, Munzer Munzer stressed that some countries exploit the issue of protecting civilians as a pretext to interfere in the affairs of other countries.

During a UN Security Council session on Tuesday on the “Protection of Civilians in Armed Conflict,” Munzer said that Syria will continue to carry out its duty and constitutional right to protect its citizens against terrorist groups.

He expressed the Syrian delegation’s reservations about some of the information and assessments included in the conceptual note related to this session, and the UN Secretary-General’s report entitled “The Protection of Civilians in Armed Conflicts.”

Syria believes that the protection of civilians is, and will remain, the first and supreme goal for governments around the world. They shoulder the responsibility to achieve those goals through the protection all of humanity, against the scourges of conflicts and wars and preserving the basic rights and dignity of human being, he clarified.

He criticized some countries’ double standards and selectivity in dealing with the issue of protecting civilians, as these countries exploit this issue to serve their governments’ political goals, such as using it as a pretext to interfere in the internal affairs of other countries.

Munzer said that the protection of civilians can only be accomplished by a full commitment to the principles of the UN Charter and the provisions of international law, on top of respecting the sovereignty of countries and adopting a non-interference policy.

The acting Charge d’ Affaires accused some UN reports of being politicized and adopting open sources that are either directly affiliated with armed groups or supported and financed by states which are involved in supporting terrorism, citing the so-called the “White Helmets” group which is active in areas under the control of Jabhat al-Nusra which is classified by the UN Security Council as a terrorist group.

He pointed out that UN humanitarian organizations and teams operating in Syria have documented how the terrorist groups used medical facilities and schools under their control as bases for launching rocket and mortar attacks. And that they destroyed hospitals and looted their equipment, asserting that those organizations and teams saw with their own eyes the depots belonging to terrorist groups in Aleppo, eastern Ghouta, Homs, and other areas which were filled with tons of humanitarian aid, food, and medical equipment that they had been hoarding and not allowing civilians to access them.

The UN team for assessment of the situation in Raqqa has documented in its recent report the complete destruction of the city caused by the illegal so-called US-led “international coalition”, including the medical facilities, schools and infrastructure, Munzer added.