Russia’s Foreign Minister Sergey Lavrov claims that despite a US presence, terrorist groups are present in al-Tanf and al-Rukban writes SANA 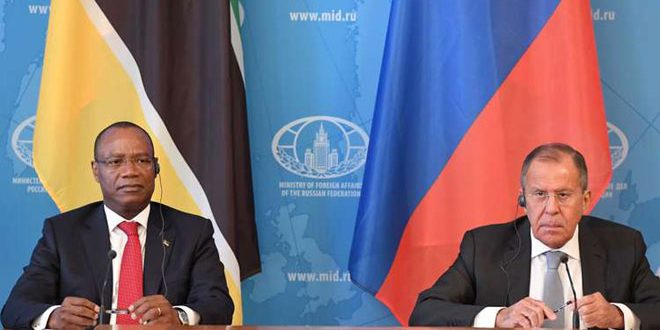 Russia’s Foreign Minister Sergey Lavrov said that terrorist groups are still present in the areas such as al-Tanf and al-Rukban Camp in the Syrian desert where US forces are also deployed.

“We have gathered much evidence and strange things are happening in al-Tanf. It is our opinion, that this area is of no considerable significance to the anti-terrorist operation. In practice, we can see that in this area, including al-Rukban refugee camp, armed groups appear ever more often and, according to our sources, they have connections with Daesh,” Lavrov said in a press conference on Monday with Jose Condungua Pacheco, his counterpart from Mozambique.

He recalled that the issue has been repeatedly brought up with US partners.

“We drew attention to the fact that this conflicts with our agreements on to how to arrange for de-escalation work in Syria within the framework of regular contact with the military,” Lavrov said.

The top Russian diplomat said that Moscow expects Washington to withdraw troops from Syria’s al-Tanf, as their presence there is pointless from a military standpoint, stressing that only the Syrian Arab Army must remain on the country’s southern border.