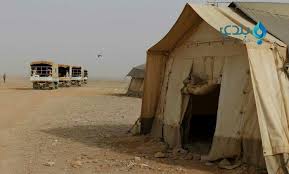 Poverty and illness have pushed dozens of families over the past few days to leave the al-Rukban camp (300 km southeast of Homs city) on the Jordan-Syria border and head towards the capital Damascus and its environs which are now under Syrian regime control.

The head of the media office in the civil administration of the camp, Mahmoud Hamili, told Smart News that more than 200 families suffering from poverty and people with intractable diseases had left the camp for shelter centers in the city of Adra, hoping to receive the necessary treatment and secure a better life.

Hamili added that “some of the highly-impoverished families which include people who are sick as a result of the poor conditions in the camp, are choosing to leave for regime areas, subjecting themselves to the risk of arrest, so that they can have their illnesses treated and to alleviate the hunger and poverty they are enduring.”

He added that international organisations such as the United Nations and the International Red Cross are “failing to deliver the necessary support to the camp and provide basic necessities.”

A spokesman for Jaish al-Thawra (Revolutionary Commando Army), Mohamed Mustafa Jarah, said that civilians were free to choose and that no one could force anyone to stay in the camp, which is suffering from difficult humanitarian conditions and “an economic siege imposed by Jordan and the Syrian regime.”

Jarah added that in front of Russian police, regime forces treated well those who departed, but that days later they arrested those wanted by the state and that young men between the ages of 17 and 42 were put in jails or sent to the front lines.

He said that they left the camp through travel offices that were not linked to the regime, but individually the families coordinated with regime people before heading to the al-Dameer checkpoint and then entering areas under regime control, whether that be Damascus, Homs or Aleppo.

On May 20, 2018, about 70 families from the al-Fowarah tribe, who had been staying in the camp, returned to the city of al-Qaryatayn and the towns of Mahin and Huwwarin following a dispute with the Bani Khalid tribe which resulted in the death of an individual and fearing revenge attacks.

The al-Rukban camp is inhabited by 15,231 families who suffer from a lack of life necessities and declining health and education services, despite the many appeals, including the appeal by the United Nations Goodwill Ambassador to the Middle East for international bodies to respond to the deteriorating humanitarian situation.