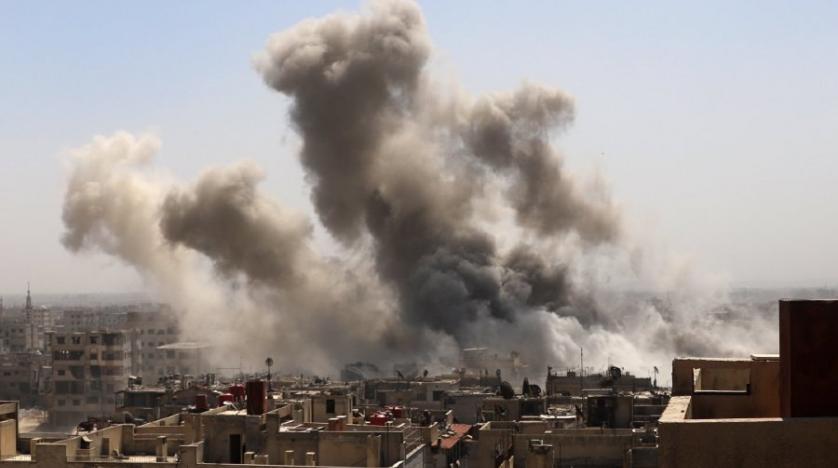 A military source said in a statement to SANA that the US-led coalition on Sunday targeted one of their military positions in the town of Al-Hiri, southeast of al-Boukamal city, leaving a number of martyrs and wounding others.

The new aggression comes three days after the Syrian army liberated an area extending from the road of Haqel al-Wared (field of roses) , al-M’aezleh and al-Tammah, to Ibn Muwain’e with 40 km-long axis and combed an area estimated at 2000 square kilometers in al-Mayadeen western Badiya.

The coalition has been targeting Syrian military positions in a desperate attempt to raise the morale of terrorist organizations that collapsed due to the achievements of the Syrian army.

The field reports confirm that Washington provides ISIS with various kinds of support to prevent its collapse and invested to keep its forces illegally in Syrian territory and steal economic resources in the eastern region through its mercenary terrorist groups.

Since it was illegally formed in 2014 under the pretext of combating terrorism, the US-led coalition has been conducting airstrikes against what it claims are ISIS targets without any authorization from the Syrian government or a United Nations mandate and committing dozens of massacres in Raqqa and villages in Deir ez-Zor and Hassakeh.

Many media outlets have quoted US officlas as denying the charge. "No member of the US-led coalition carried out strikes near Albu Kamal," Major Josh Jacques, a US Central Command spokesman, told Reuters.

A spokesperson for the US Coalition told The National, “these reports are false, the Coalition did not strike any Syrian Army positions in Eastern Syria.” The official added that their mission is “to defeat ISIS in designated parts of Iraq and Syria, and to set conditions for follow-on stability operations” and that “this has not changed.”

Some Syrian activists believe, according to their social media accounts, that Israel may have carried out the attack but the regime prefers to blame the US. An Israeli military spokeswoman commented on that by saying: "We do not comment on foreign reports."