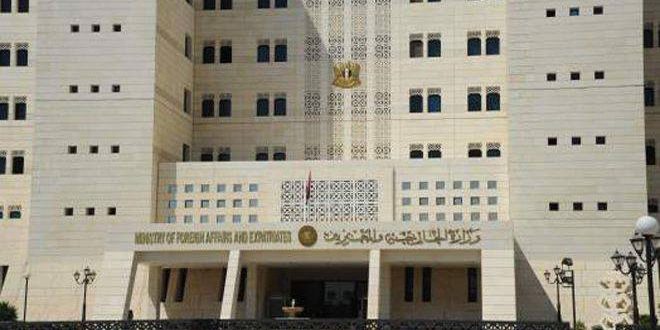 Syria expressed its strong condemnation and absolute rejection of the incursion by Turkish and US forces in and around Manbij city, emphasising its determination to free all Syrian territory from any foreign presence.

“The Syrian Arab Republic expresses its strong condemnation and absolute rejection of the incursion of Turkish and US troops in the vicinity of the city of Manbij, which comes in the context of the continued Turkish and US aggression against Syrian sovereignty and territorial integrity,” an official source at the Foreign and Expatriates Ministry said in a statement to SANA.

The source added that the Syrian people and the Syrian Arab Army which has achieved successive victories against terrorist groups, are now more resolute to liberate every inch of Syrian soil from any foreign presence and preserve the sovereignty and unity of Syria.

The source concluded its statement by saying that Syria calls on the international community to condemn the aggressive behavior of the US and Turkey, which constitutes a flagrant violation of the purposes and principles of the UN Charter.