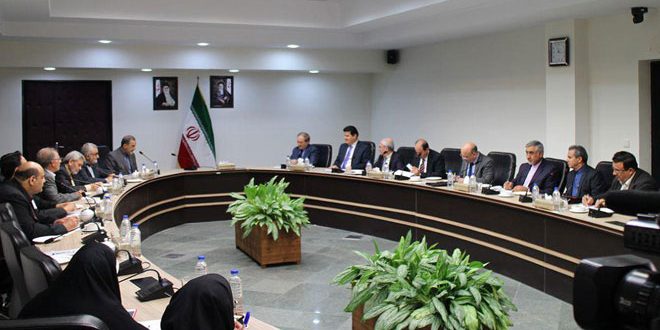 The Iranian Supreme Leader’s Top Adviser for International Affairs Ali Akbar Velayati reaffirmed his country’s continued support for Syria in its war on terrorism, as he considers the defense of Syria and the axis of resistance as a defence of Iran.

During a meeting with Deputy Foreign and Expatriates Minister Fayssal Mikdad, Velayati congratulated Syria’s leadership, government, and people on their victories in the war on terrorism.

He also stressed Iran’s support for Syria will continue until it’s cleared of terrorism.

The two sides noted the importance of the continuous consultation and coordination in various fields to achieve the interests their people and their aspirations.

Mikdad pointed out the achievements against terrorism in Syria thanks to the sacrifices of the Syrian Arab Army and the support of Iran, Hezbollah, and Russia, stressing that victory over terrorism in Syria is a victory for the region and the whole world, and that Syria is continuing to fight Western-backed terrorism.

He added that the pressure exerted by the US and the West on Syria and Iran under various pretexts to exploit international organizations such as the Organization for the Prohibition of Chemical Weapons (OPCW) is an attempt to target independent states under false pretexts to serve interests of the US and Zionism.

Mikdad said that the US withdrawal from the nuclear agreement with Iran is a disgrace in the history of the US administration and a threat to international peace and security, stressing that Syria stands with Iran in the face of the pressure exerted on it.

He also hailed the strategic alliance and cooperation between Syria and Iran and the Iranian assistance to bolster the steadfastness of the Syrian people, particularly in the economic field.

Mikdad also met the Speaker of the Iranian Shura Council Ali Larijani, who affirmed the importance of continuing coordination and cooperation between the two sides, which has contributed positively to defeating terrorism in many areas in Syria.