As the regime advances, with the support of its Russian allies, the situation in Daraa looks bleak for the opposition reports SNP 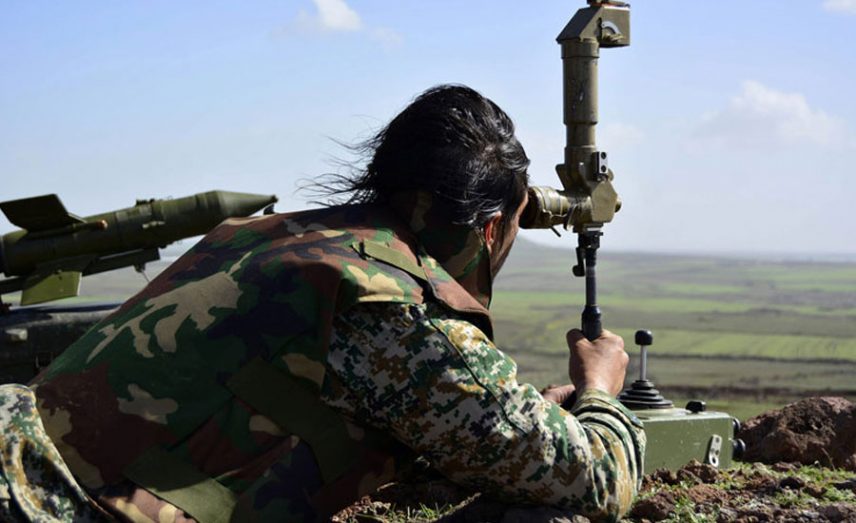 The military campaign launched by the Syrian regime against the opposition in the south continues for a fourth day, with Russian air support and intense shelling in the towns and villages of the eastern countryside of Daraa. According to the United Nations, at least 13 people were killed during the first 48 hours of the battle, while the Office of the Documentation of Martyrs in Daraa reports that 40 people were killed during the same period.

The “Battle of the South” comes after an apparent international consensus, which is a consequence of the overlapping interests of the various actors, as explained by the military analyst Colonel Ahmad Hamadeh to the newspaper Souriatna: “There are eight parties involved in the south of Syria (Iran, Russia, the opposition, the regime, the US, Israel, Jordan, and the Islamic State) and no major development can happen without a consensus between them.”

The military events have taken a serious turn in the past  few days as a result of two factors: the involvement of Russian fighter jets in the battle after initial reports that Moscow would not provide air cover to the regime; and the retreat of Washington from its previous warnings to the regime that it would face serious consequences in the event of a military operation. These gave the green light for the regime to proceed in its plan and force the province to surrender as in other areas, most recently in eastern Ghouta.

The Sada al-Sham newspaper reported on Jun. 26, 2018, that the battle in the south would be decisive for the Syrian regime and its Russian ally because of the dwindling opportunities left for the opposition to confront the regime and its militias “due to the Americans negative attitude, if not in collusion, then in agreement with Israel and Jordan.”

The report continued: “Israel only wants to remove the Iranian militias from the border, regardless of who controls it, while Jordan is only interested in the repercussions of what is happening in terms of security and the humanitarian situation, namely the non-infiltration of armed groups to its territory, and stopping another waves of refugees to its borders.”

Washington withdrew its support for Free Syrian Army factions in Daraa, despite prior warnings to the regime not to approach the south and threatening it with punishment. This surprise move made the situation more difficult for the opposition in the face of the unprecedented military campaign launched by the regime, backed by Russia, and made them understand that they are alone in this battle.

Within hours of the start of the battle, Washington told the FSA not to expect military support.

“We in the United States government understand the difficult conditions you are facing and still advise the Russians and the Syrian regime not to undertake a military measure that violates the de-escalation zone in southwestern Syria,” the US military said in a statement.

While negotiations are taking place between the international players, Enab Baladi ruled out any agreement being made, and sees the recent military move as an indication of the failure of negotiations, especially between the two main sides, the US and Russia.

The newspaper said that the prospects for the future of the region were still balanced between the actual start of the battle, which may be the largest of its kind in Syria, and the achievement of an international consensus that would stop it and lead to concessions, as happened in other Syrian provinces and regions.

The issue of southern Syria is expected to be discussed during the six-nation meeting in Geneva, which, although it was expected to focus on the formation of a constitutional committee, will set aside a space for talking about the south and Assad's violations of the de-escalation agreement.

According to military analyst Colonel Ahmad Hamadeh, the regime seeks to use the Ghouta scenario to advance in Daraa, by dividing the rural areas of the province into parts with the aim of imposing a solution through reconciliations, or controlling through force and push the factions to withdraw from one region to another.

The colonel said in an exclusive interview with Souriatna that Assad is using Russian support to target hospitals as he did in Ghouta, and he has already managed to destroy the Karak and Bosra al-Harir hospitals.

Suhail al-Hassan, nicknamed “The Tiger,” is heading a large military buildup accompanied by Russian soldiers to the military airport of Khalkhalah in rural Suweida, which is expected to be used by regime forces as a command center for military operations.

“A military convoy from Damascus entered the province of Suweida, which included a large number of large and medium military vehicles and trucks loaded with tanks, as well as medium guns and machine guns. The number of vehicles that entered is between 75 and 100 vehicles, accompanied by Russian military police cars.”