Prisoner swaps, returning families, reconciliations and disagreements with the OPCW. Catch up on the latest events surrounding Syria. 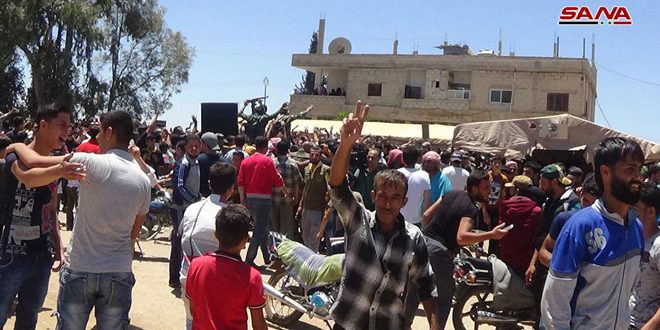 Syria condemned a recent decision by Western states that sought to pass, during an emergency conference of the Organization for the Prohibition of Chemical Weapons (OPCW), considering it an attempt to politicize the organization’s work. “The Syrian Arab Republic expresses deep concern over the blackmail tactics and threats adopted by a group of Western states, especially the ones involved in the tripartite aggression against Syria: the US, UK and France, to pass a decision during the emergency conference of the OPCW,” the Foreign and Expatriates Ministry said in a statement commenting on the outcomes of the OPCW emergency conference. The Ministry added that the decision contradicts the provisions of the Chemical Weapons Convention (CWC) and sets a dangerous precedent in the international system, granting a technical organization the powers to conduct criminal and legal investigations outside of its mandate and to assign blame in cases involving the use of chemical weapons. [Al-Thawra]

Kurdish-led Syrian Democratic Forces (SDF) conducted a prisoner swap with the regime army in eastern Deir ez-Zor province, local activists said Friday. Two regime troops were freed by the SDF in the town of al-Salhiya in the eastern countryside of Deir ez-Zor. In return, regime forces released three SDF militants who were arrested by pro-regime militias weeks ago. The SDF, which the Kurdish YPG militia spearheads, has been the main partner of the US-led coalition against the Islamic State in Syria, helping drive the jihadists out of swathes of northern and eastern Syria last year. [Zaman Al Wasl]

Tens of families coming from terrorist-controlled areas in Idleb returned on Saturday in big numbers via the Abou al-Dahour crossing to their villages and areas in Aleppo, Idleb and Hama countryside, which the Syrian Arab Army cleared of terrorism. In the morning, families streamed through the Abou al-Dahour crossing with their vehicles, equipment and personal belongings. Despite the fatigue that was clear on their faces, the returning families expressed relief after arriving at the Syrian army’s points, thanking the Syrian army which restored safety and security to their areas. [SANA]

Al-Ghariya al-Sharqiya town in Daraa countryside joined the reconciliations, with its residents gathering at the entrance to welcome the Syrian Arab Army and thank them for saving them from terrorism, a SANA reporter said Saturday. Meanwhile, Dael town in the northern countryside of the province also joined the reconciliation in addition ton the areas of Tal Khleif and Tal al-Sheikh Hassan, as gunmen started to give up their weapons to the Army. [SANA]