The Syrian Network for Human Rights reported that June saw an upturn in the number of civilians killed, due to the offensive in Daraa 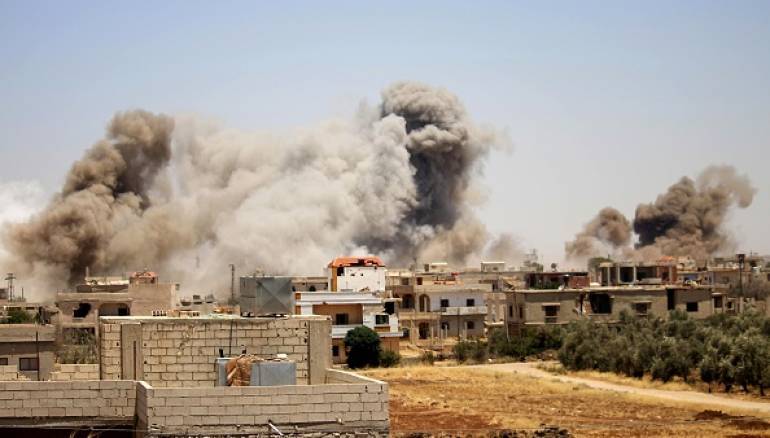 At least 4,759 civilians were killed as a result of the conflict in Syria in the first half of 2018, including 593 civilians in June alone, according to new report by the Syrian Network for Human Rights (SNHR).

The report notes that since is was founded the SNHR has largely focused on documenting all victims, regardless of the perpetrating party and created a database of the names and their information such as sex, age, occupation, cause of death, the party that killed them, and the type of weapon used.

The report also sheds light on the various and differing patterns of crimes and methods of killing that have been documented since the popular uprising for freedom started in March 2011, ranging from gunfire, air attacks, torture inside detention centers, chemical and cluster attacks, landmines, as well as victims who died of hypothermia, starvation, shortages in medication or drowning as they fled.

The report includes the civilian death toll by the seven parties involved in the conflict in Syria. The report stresses that military victims weren’t included in light of the difficulties found in this type of documentation.

The report draws upon ongoing monitoring of news and developments, and on a wide network of relations with tens of various sources, in addition to analyzing a large number of pictures and videos.

The report stresses that many incidents that resulted in casualties might not constitute a violation of international humanitarian law but involved collateral damage. Therefore, they are recorded in order to preserve historical accuracy without considering them as having qualified as crimes.

According to the report, June saw a rise in the civilian death toll compared to May in light of the vicious offensive in Daraa province, a de-escalation zone, by Syrian-Russian forces who topped all parties in terms of killing civilians in the month of June by killing 393 civilians, including 221 in Daraa.

The report adds that the trend of civilian killed by bombing whose perpetrators weren’t identified continued in June for a third month in a row, as well as assassinations. Most of these incidents were in Idleb province.